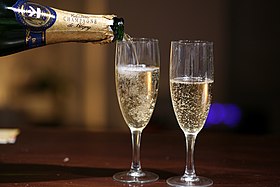 Champagne socialist is a political term originating in the United Kingdom.[1][2] The phrase is used to describe self-identified socialists whose luxurious upper middle-class or "preppy" lifestyles (perhaps including consumption of Champagne) apparently contradict their political convictions.[3] It is a popular epithet that implies a degree of hypocrisy, and it is closely related to the concept of the "liberal elite".[4]

The term is broadly similar to the American terms "Learjet liberal", "limousine liberal" or "latte liberal", and to idioms in other languages such as the Spanish Izquierda caviar, the French Gauche caviar, the German Salonsozialist, the Portuguese Esquerda Caviar, the Italian Radical chic and Polish kawiorowa lewica. Other related terms include "Hampstead liberal", "Gucci socialist", "Gucci communist", "Neiman Marxist", "cashmere communist", and in Ireland, "smoked salmon socialist". 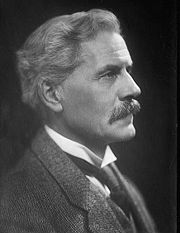 In the UK, the term is often used by right-wing critics to disparage more progressive political opponents.[2] This argument claims that the champagne socialist espouses leftist views while enjoying a luxurious lifestyle; one example might include Labour Party supporters who stereotypically live in Inner London and consume highbrow media.

This usage of the term has been criticised by the writer and broadcaster Caitlin Moran as a fallacious argument, because she claims it assumes that only those who are poor can express an opinion about social inequality.[5]

The term has also been used by left-wing commentators to criticise centrist views. Some traditional left-wingers regard the first Labour Prime Minister Ramsay MacDonald as a "champagne socialist" who betrayed the Labour movement. MacDonald's lavish lifestyle and his mingling with high society is supposed to have been a corrupting influence that led to the end of the Labour Government in 1931 and the eventual formation of the National Government.[2] More recently, the epithet has been levelled at supporters of the New Labour movement which brought Tony Blair to power in 1997.[6]

In an article about Oscar Wilde's 1891 essay "The Soul of Man under Socialism", political commentator Will Self expressed the view that Wilde could be considered an early champagne socialist because of his aesthetic lifestyle and socialist leanings.[7]

The writer and Labour supporter John Mortimer, when accused of being a champagne socialist, said that he preferred to be thought of as "more a Bollinger Bolshevik".[8]

In cult TV series Absolutely Fabulous (series 4) episode 1 ("Parralox"), Saffron is offered a job with New Labour. While she is at pains to avoid being seen as a champagne socialist, her grandmother Mrs. Monsoon considers the family to be 'Bolly Bolsheviks'.[9]

The label has also been applied to the Labour politician Geoffrey Robinson MP on account of his large personal fortune.[10][11] Singer Charlotte Church has described herself as a "prosecco socialist",[12] referring to the increasing popularity and lower price range of non-champagne sparkling wines such as prosecco and cava.

In Australia and New Zealand, the variant "Chardonnay socialist" was used, as Chardonnay was seen as a drink of affluent people.[13][14][15]

Australian left-wing "true believers" used the term against supporters of the failed republic referendum of 1999, where the vote was split not along conventional party lines but socio-economic divides. The rich overwhelmingly supported the change; the less well-off were opposed. Staunch Australian right-wingers also used the term to deride those who supported what they considered "middle-class welfare"—government funding for the arts, free tertiary education, and the ABC.[16]

By the late 1990s, chardonnay had become more readily available and generally consumed[15] in Australia; today it is the most dominant white wine variety produced in the country. As a result, the drink's association with elitism has faded.

Current Affairs ran a lighthearted article featuring a political cartoon of guests at a Marxist gathering dressed in fancy attire and sipping on champagne. The central argument was that conspicuous consumption was not inherently antithetical to leftist values so long as luxuries were shared equally. As the magazine put it, "When we say let them eat cake, we are serious: there must be cake, it must be good cake, and it must be had by all. The reason Marie Antoinette needed beheading was not that she wished cake on the poor, but that she never actually gave them any."[17]