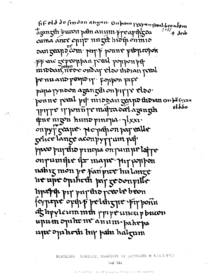 The Blickling Homilies is the name given to a collection of anonymous homilies from Anglo-Saxon England. They are written in Old English, and were written down at some point before the end of the tenth century, making them one of the oldest collections of sermons to survive from medieval England, the other main witness being the Vercelli Book.[1] Their name derives from Blickling Hall in Norfolk, which once housed them; the manuscript is now Princeton, Scheide Library, MS 71.

As numbered in the first edition of the homilies, by Richard Morris, the contents are:

Origin and audience of the collection

Little is known about the origin of the homilies or their intended audience. In the assessment of D. G. Scragg, the manuscript

is in origin a collection, put together, perhaps over a period of time, from a number of sources ... the scribes took care to put together a book which followed a preconceived design, following the chronology of the church year, and they perhaps took individual items from different sources, rather than blocks of items.

There is little overlap with the homilies of the Vercelli Book, from south-eastern England, suggesting that the Blickling Homilies were gathered in a different regional and intellectual milieu; the language of the Homilies suggests a Mercian origin'. The collection does have some overlaps with another homily collection, MS Cambridge, Corpus Christi College 198, whose origins are also poorly understood,[2] but which are likely to have been in the West Midlands.[3]

Meanwhile, although it is surely significant that the homilies were in Old English rather than Latin, 'little sense of a specific congregation or reading audience prevails in this collection of ancient and commonplace materials for the instruction of Christian folk', and the intended audience of the material is essentially unknown.[4]

The most famous and extensively studied of the Blickling Homilies is XVI (XVII in the numbering of Morris's edition), 'To Sanctae Michaeles Mæssan' ('On St Michael's Mass', generally celebrated on September 29 in tenth- to eleventh-century Anglo-Saxon England).[5] The homily is not noted for being well composed,[6] but for its relationship with Anglo-Saxon pilgrimage to Italy on the one hand, and some striking similarities with the Old English poem Beowulf on the other.

The homily is a translation of a version of a Latin hagiographical text known as 'De apparitione Sancti Michaelis' (Bibliotheca Hagiographica Latina 5948).[7] This story provides a foundation myth for the Sanctuary of Monte Sant'Angelo, in Apulia, southeast Italy, the oldest Western European church dedicated to St Michael and a major pilgrimage site in the Middle Ages. Our earliest manuscripts of 'De apparitione' are of the early ninth century, and so this version was probably composed in the eighth century. The text tells of three different 'apparitions' by St Michael, which 'appear to have nothing in common and suggest at least three layers of narrative accretion'; the oldest strata of the text seem to go back to an earlier, lost version of perhaps the sixth century.[8] Having come to Italy from the Near East, the cult of Michael spread to Frankia, where peregrinating Irish monks learned of it; the cult became popular in Ireland, from where the cult had spread to Anglo-Saxon England already by the seventh century.[9] It is also clear that a number of Anglo-Saxon pilgrims passed through Monte Gargano: among the many pilgrims who inscribed their names on the cave walls, five bore Anglo-Saxon names, some inscribing in runes. Their date is uncertain but must be between c. 700 and c. 850.[10] In the assessment of North, Allard, and Gillies, 'this aspect of history transforms the genre of this work [Blickling Homily XVI] ... from ... homily to tourist brochure'.[11] Blickling Homily XVI seems to have a common source with Ælfric of Eynsham's later homily for September 29, which was clearly a Latin or vernacular version of the 'De apparitione'.[12]

The most striking difference between Blickling Homily XVI and the Latin text of which it is a translation is that Blickling Homily XVI ends with a description of Hell, derived ultimately from the Visio sancti Pauli; the closest parallels are with a ninth-century, Latin version of the Visio known as Redaction XI,[13] of Insular and probably Irish origin.[14] The Blickling Homily XVI description of Hell is recognised as a close parallel to the description of Grendel's home in Beowulf (lines 2719-33). The homily may have influenced the poem directly, or both texts may have drawn on common sources;[15] the main recent study of the connection is Charles D. Wright's, which argues for independent descent from a common source.[16]

The Blickling homilies were first edited and translated in the nineteenth century by Richard Morris, and were republished again in a more recent volume by Richard J. Kelly, although several scholars have since pointed to the many serious deficiencies with the latter.[17][18][19] Samantha Zacher has indicated that a new edition is underway at the University of Toronto.[20]

0.32 km
No Reviews
Favourite
Link to Town: Kyabram
Photolithograph of Blickling Homilies (Princeton, Scheide Library, MS 71), leaf 141. The Blickling Homilies is the name given to a collection of anonymous homilies from Anglo-Saxon England. They are written in Old English, and were written down at some point before the end of the tenth century, making them one of the oldest collections of sermons to survive from medieval Read more…
View all business in Kyabram
How to whitelist website on AdBlocker?