The term charter covers a range of written legal documentation including diplomas, writs and wills.[1] A diploma was a royal charter that granted rights over land or other privileges by the king, whereas a writ was an instruction (or prohibition) by the king which may have contained evidence of rights or privileges. Diplomas were usually written on parchment in Latin, but often contained sections in the vernacular, describing the bounds of estates, which often correspond closely to modern parish boundaries. The writ was authenticated by a seal and gradually replaced the diploma as evidence of land tenure during the late Anglo-Saxon and early Norman periods. Land held by virtue of a charter was known as bookland.

Charters have provided historians with fundamental source material for understanding Anglo-Saxon England, complementing the Anglo-Saxon Chronicle and other literary sources. They are catalogued in Peter Sawyer's Annotated List and are usually referred to by their Sawyer number (e.g. S 407).

The oldest surviving Anglo-Saxon charter, issued by King Hlothhere of Kent in 679

The Anglo-Saxon charter can take many forms: it can be a lease (often presented as a chirograph), a will, an agreement, a writ or, most commonly, a grant of land.[1] Our picture is skewed towards those that regard land, particularly in the earlier period. Land charters can further be subdivided into royal charters, or diplomas, and private charters (donations by figures other than the king).

Over a thousand Anglo-Saxon charters are extant today, as a result of being maintained in the archives of religious houses. These preserved their charters so as to record their right to land. The oldest extant original charter, now in Canterbury Cathedral archive, was issued in 679 by King Hlothhere of Kent granting land to the Reculver Abbey.[2] Some surviving charters are later copies, which sometimes include interpolations.[3]

Anglo-Saxon charters were sometimes used in legal disputes, and the recording of the contents of a charter within a legal document has ensured the survival of text when the original charter has been lost. Overall, some two hundred charters exist in the original form, whilst others are post-Conquest copies, that were often made by the compilers of cartularies (collections of title-deeds) or by early modern antiquaries. The earliest cartularies containing copies of Anglo-Saxon charters come from Worcester, early-11th-century Liber Wigorniensis and Hemming's Cartulary of a century later; a much later example, Wilton Cartulary, compiled in the mid-13th century at Wilton Abbey, still includes a significant amount of Anglo-Saxon material.[4]

The importance of charters in legal disputes over land as evidence of land tenure, gave rise to numerous charter forgeries,[5] sometimes by those same monastic houses in whose archives they were preserved. The primary motivation for forging charters was to provide evidence of rights to land. Often forging was focussed on providing written evidence for the holdings recorded as belonging to a religious house in the Domesday Book. It is important when studying charters to establish their authenticity. The study of charters to determine authenticity gave rise to diplomatics – the science of ancient documents.

Anglo-Saxon charters are catalogued in Peter Sawyer's 'Annotated List',[6] and are usually referred to by their Sawyer number (e.g. S 407). 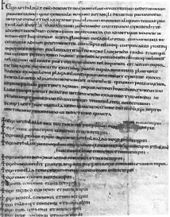 The three most common forms of Anglo-Saxon charter are diplomas, writs and wills.

The largest number of surviving charters are diplomas, or royal charters, that granted privileges and rights, usually over land. The typical diploma had three sections:[7] protocol, corpus, and eschatocol. The protocol opened the charter by invoking God and enumerating the pious considerations for the King's act (proem). The corpus was usually in Latin and named the beneficiary, recorded the grant or transfer (dispositive clause), reserved common burdens (reservation clause) and invoked the wrath of God on anyone who failed to observe it (anathema or sanction). The corpus' final section, which was often in Old English, described the boundaries of the land (boundary clause). The eschatocol was composed of a dating clause and witness-list, which usually included powerful lay and ecclesiastical members of the king's court.

Much of the language of the diploma was explicitly religious[8] – that a grant was made for the benefit of the grantor's soul or that anyone breaking the charter would be excommunicated. Charters typically opened by situating themselves firmly within the Christian order, with a pictorial (cross, chrismon or alpha-omega) and a verbal invocation to God. Many early charters were granted in anticipation of the founding of a monastery. The document served a largely secular purpose – to document the legal possession of land and to free that land from certain duties that would otherwise be attached to it.

Writ of King Edward the Confessor granting land at Perton in Staffordshire to Westminster Abbey, 1062–1066

The second most common form of Anglo-Saxon charter, although far fewer in number than the diploma, is the royal writ. These differed from the diploma in both form and function. A writ was an instruction from the king to a named official or group of recipients. It started with a greeting and was authenticated by a royal seal. The writ did not require witnesses and was often written in Old English.[9] Under the Normans, the use of writs was extended to cover many other aspects of royal business and was written in Latin. Florence Harmer provided the text (and translation when written in Old English) of 120 pre-Conquest royal writs. 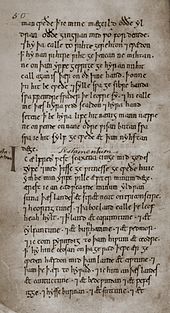 Anglo-Saxon wills were intended to make gifts of property (including land) after the writer's death, but they were not wills in the modern sense.[10]

Wills are rarer than writs. The first dedicated study, Anglo-Saxon Wills by Dorothy Whitelock was able to identify 39 documents.[10] The number grew to 55 with publication of another 16 among the Anglo-Saxon Charters by Agnes Jane Robertson in 1939.[11] Since 1939, contributions to the list were few and far between; in her 2011 Wills and Will-making in Anglo-Saxon England Linda Tollerton published the most up-to-date corpus, with 68 examples in total. The surviving documents are very unevenly distributed both in time and space: from the 9th century, for example, only 9 wills are known, and 6 of them are in Canterbury. Not a single will from any period is known from further North than Burton upon Trent in Staffordshire. Furthermore, only 22 wills can be found in manuscripts written before 1066; originals are even rarer, as some, like those of Alfred the Great or Wulfric Spot, are known to be pre-Conquest copies, while still other may in fact be mere extracts or ancient forgeries.[12]

Only two wills of kings have been preserved, those of Alfred and Eadred, both in later copies.[13][14] Anglo-Saxon women whose wills survive include Wynflæd (mother of Ælfgifu of Shaftesbury and grandmother of Kings Eadwig and Edgar),[15] King Edmund I's second wife Æthelflæd and her sister Ælfflæd.[16][17]

The content of these boundary descriptions varied, but in many instances these descriptions revealed the Anglo-Saxons' ideas about their landscape.[19] 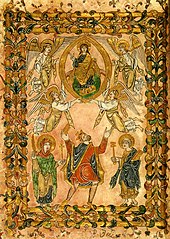 A page from the charter of Edgar to the New Minster, Winchester. Unusually, the charter is in the form of a book.

Charters have provided fundamental source material for understanding Anglo-Saxon England that complements the Anglo-Saxon Chronicle and other literary sources. They are often used by historians as sources for the history of Anglo-Saxon England.[20] It was frequently kings who gave land in charters. By seeing what land was awarded, it is possible to see the extent of a king's control and how he exercised his power. In 846, Æthelwulf of Wessex granted land in Devon by charter, perhaps dividing the spoils from this recently conquered territory among his men.

Charters give lists of persons that attested the document and so it is possible to see who was present at the king's court.[21] The very detailed diplomas drafted by the scribe known as "Æthelstan A" show that several Welsh kings, including Hywel Dda, attended the court of Æthelstan in the late 920s and the 930s. A person's absence from court can be equally revealing: Wulfstan I, Archbishop of York from 931 to 956, failed to attest any royal charters between 936 and 941, during which time the Battle of Brunanburh was fought between Æthelstan and an alliance of the Hiberno-Norse king of Dublin, Olaf Guthfrithson and the Scottish king, Constantine. Wulfstan was rather independently-minded and his absence from the West Saxon court can be linked with possible participation at Brunanburh and his later activity as a kind of kingmaker in York. It is also possible to trace a man's career at court through his position in the witness list, as in the case of Eadric Streona at the court of Æthelred 'the Unready' in the early 11th century.

Burdens that were due by landowners to the king, such as providing soldiers, resources and man-power, were sometimes relieved in charters.[22] This gives historians the opportunity to examine aspects of Anglo-Saxon society.

A joint committee of the British Academy and the Royal Historical Society was set up in 1966 to oversee a definitive edition of the entire corpus of Anglo-Saxon charters. The edition is to be published in approximately thirty volumes. The late Professor Nicholas Brooks was chairman of the committee in charge; he has been replaced by Professor Simon Keynes.[23][24] The following volumes have been published.}}:[25]