The 2017 Western Australian state election was held on Saturday 11 March 2017 to elect members to the Parliament of Western Australia, including all 59 seats in the Legislative Assembly and all 36 seats in the Legislative Council. The eight-and-a-half-year two-term incumbent Liberal–WA National government, led by Premier Colin Barnett, was defeated in a landslide by the Labor opposition, led by Opposition Leader Mark McGowan.

Labor won 41 of the 59 seats in the Legislative Assembly—a 12-seat majority. Not only is this WA Labor's strongest performance in a state election, but it is also the largest majority government and seat tally in Western Australian parliamentary history. Additionally, Labor exceeded all published opinion polling, winning 55.5 percent of the two-party-preferred vote from a state record landslide 12.8-point two-party swing.[1][2][3] It is the worst defeat of a sitting government in Western Australia, as well as one of the worst defeats of a sitting state or territory government since Federation.

Labor also became the largest party in the Legislative Council with 14 of the 36 seats. The Labor government will require at least five additional votes from non-government members to pass legislation.[3][4]

The four main media networks covering the election, the ABC, Sky News, Seven News and Nine News, all called the election for Labor within two hours after polls closed. McGowan succeeded Barnett to become the 30th Premier of Western Australia.[7][8]

By the morning of 12 March, two thirds of votes had been counted and seven lower house seats were still in doubt, showing that Labor had won at least 36 seats, well above the 30 required for a majority, which the ABC predicted would increase to 41. Meanwhile, the Liberals and WA Nationals had won only 10 and five seats respectively, with a further three expected to be retained by the Liberals.[9]

The Labor landslide was built primarily on a near-sweep of Perth. Labor took 34 of the capital's 43 seats on a swing of 13.6 points, accounting for nearly all of its majority. By comparison, it had gone into the election holding 17 seats in Perth. According to the ABC's Antony Green, the swing Labor needed to make McGowan premier was not nearly as large as it seemed on paper. Labor theoretically needed a swing of 10 points, but that was mainly because of inflated margins in Liberal-held outer suburban seats.[2]

Labor became the largest party in the Legislative Council with 14 of the 36 seats. The Labor government will require at least five additional votes from non-government members to pass legislation.[4][13]

On 4 April, the Western Australian Electoral Commission conducted a recount of 2013 election results to fill two casual vacancies for the remainder of the 2013–17 term caused by the resignation and subsequent election to the Legislative Assembly of Amber-Jade Sanderson (Labor) in East Metropolitan and Peter Katsambanis (Liberal) in North Metropolitan.[14] The vacancies were filled by Bill Leadbetter (Labor) and Elise Irwin (Liberal), who will first sit in the Legislative Council on 11 May 2017.[15] 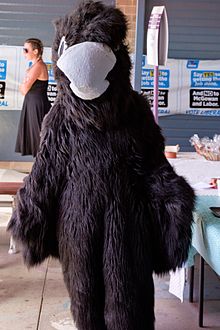 Barnaby C, protecting the Carnaby's black cockatoo habitat and an Anti Roe 8 supporter appeared at a number of media events during the election campaign

At the 2013 election, Labor won 21 seats, the Liberals won 31 seats and the Nationals won 7 seats. No seats were won by independents.

On 15 April 2016, the Liberal member for Hillarys, Rob Johnson, resigned from the Liberals to sit as an independent, leaving the government with 30 seats in the lower house.

At the 2013 election, the Liberals won 17 seats, Labor won 11 seats, the Nationals won five seats, the Greens won two seats and the Shooters and Fishers won one seat.

Western Australia's Legislative Council is divided into six regions. Three are based in Perth, while three are rural. Each region elects six members to the Legislative Council. These areas are not of similar population sizes, with rural areas receiving from one and a half to about six times the effective membership of the metropolitan regions.

The Western Australian rural population dropped from about 12.1% to 10.7% of the state's enrolled electors after the 2008 election. Election analyst Antony Green predicted this would make it more difficult for the Liberals or Labor (who typically perform better in Perth than rural areas) to increase their presence within the Legislative Council.[20]

A redistribution of electoral boundaries for the lower house was completed on 27 November 2015. This resulted in a net gain of one seat for the Liberals from Labor. The Liberal seats of Alfred Cove, Eyre and Ocean Reef, the Labor seat of Gosnells and the National seat of Wagin were abolished. Five new seats were created (or re-created): the notionally Liberal seats of Bicton (mostly replacing Alfred Cove) and Burns Beach (mostly replacing Ocean Reef), the notionally Labor seats of Baldivis (created from parts of Kwinana and Warnbro) and Thornlie (replacing Gosnells), and the notionally National seat of Roe (merging Wagin and Eyre). The Labor seats of Collie-Preston and West Swan became notionally Liberal.[21]

Members who have announced they will not re-nominate at the 2017 election:

The following Mackerras Pendulums work by lining up all of the seats according to the percentage point margin post-election on a two-candidate-preferred basis,[28] grouped as marginal, safe etc. as defined by the Australian Electoral Commission.[29]

This pendulum takes the redistribution into account. One sitting member, retiring Wagin Nationals MP Terry Waldron, does not appear in this pendulum: his seat was combined with Eyre to form Roe, a seat with a National margin that will also be contested by Eyre Liberal MP Graham Jacobs, who is listed as the defending member below. Two Liberal members, Dean Nalder (Alfred Cove, now renamed Bicton) and Matt Taylor (Bateman), were contesting each other's seats; this is reflected below. Retiring members are listed in italics.