A leadership election in the Liberal Party of Australia, the party of government in the Parliament of Australia, was held on 9 January 1968. It followed the disappearance and presumed drowning of previous leader Harold Holt, who had been declared dead on 19 December 1967. The contest was won by Senator John Gorton in a party room ballot; he was sworn in as prime minister the following day, replacing caretaker John McEwen.[1][2]

The Liberal Party Room as the election took place.

Incumbent party leader Harold Holt sensationally disappeared while swimming at Cheviot Beach near Portsea on the Mornington Peninsula of Victoria on 17 December 1967. William McMahon, the incumbent Deputy Leader of the Liberal Party was assumed to be his probable successor, however, John McEwen, the interim Prime Minister and leader of the Country Party (the junior Coalition partner), announced that he and his party would not serve in a government led by McMahon. McMahon subsequently withdrew. 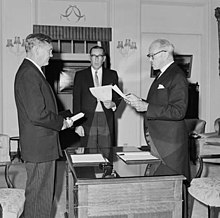 Gorton being sworn in as Prime Minister on 10 January 1968.

To date, Gorton is the only Australian Senator to be sworn in as Prime Minister. He later won Holt's vacant seat of Higgins at a by-election. Hasluck was later nominated and accepted the position of Governor-General from Gorton in 1969 and Snedden became party leader in December 1972. Bury later served as Treasurer of Australia under both Gorton and McMahon respectively.