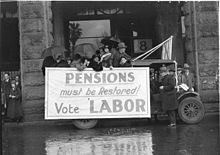 The result of the election was:

The UAP/Country Party coalition of Bertram Stevens/Michael Bruxner had a majority of 32 (down 10) and continued in government throughout the term.

The ALP (NSW) and the Federal Executive of the Australian Labor Party were still divided at the 1935 election and the ALP (Federal) ran candidates in 22 seats without success. The parties were re-united in 1936. Jack Lang remained party leader and Leader of the Opposition throughout the term of the parliament.