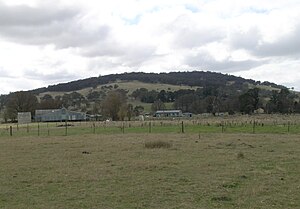 A sheep station is a large property (station, the equivalent of a ranch) in Australia or New Zealand whose main activity is the raising of sheep for their wool and meat. In Australia, sheep stations are usually in the south-east or south-west of the country. In New Zealand the Merinos are usually in the high country of the South Island. These properties may be thousands of square kilometres in size and run low stocking rates to be able to sustainably provide enough feed and water for the stock.

Sheep stations and sheep husbandry began in Australia when the British started raising sheep in 1788 at Sydney Cove.[1]

In Australia, the owner of a sheep station can be called a pastoralist, grazier; or formerly, a squatter, as in "Waltzing Matilda".

In the Australian and New Zealand context, shearing involves an annual muster of sheep to be shorn, and the shearing shed and shearers' quarters are an important part of the station. A station usually also includes a homestead, adjacent sheds, windmills, dams, silos and in many cases a landing strip available for use by the Royal Flying Doctor Service and other light aircraft. Some of these items have regional variants, usually to deal with climate extremes.

Similarly, where the climate and vegetation allow, especially north of the dog fence, cattle stations are similar but run beef cattle rather than sheep. Some properties are not exclusively sheep or cattle stations but may have a mix of cattle, sheep, cropping and even goats which makes the owner less vulnerable to changes in wool or beef prices.

Walter Peak is a notable old sheep station that was founded in 1860 on the south shore of Lake Wakatipu, South Island, New Zealand. It is 13 kilometres across Lake Wakatipu from Queenstown, 40 minutes steaming time on the historic TSS Earnslaw steamship.

Management of a sheep station

Management practices vary according to the location of the station and the season being experienced. For instance, drought necessitates decisions concerning the sale of stock or provision of supplementary feeding.

Routine procedures include supervising crutching, mating, shearing, treating for ticks, lice and maggots (if necessary), lambing and lamb marking. Lambs are weaned at about five months of age. Drenching for internal parasites is an important routine on a sheep station.

Other activities include ram buying and classing the sheep in order to determine the inferior types that are to be culled.

Crops and pastures are often also grown to provide additional feed for the sheep, especially those that will be raised and sold as prime lambs. Fences require regular inspections to locate and repair any damage that has been found.[2] Sheep breeders may also need to undertake predatory animal control if crows, dingos or foxes are likely to be a problem.

The term generally used by agricultural and environmental professionals for sheep station forms of landholding is [rangeland], but is not in general use by Australians. The term ranch is not used either. The term sheep run was also commonly used during the early settlement period to describe sheep stations operated by squatters.

For administrative purposes, many stations exist on pastoral leases, but in state government jurisdictions they are increasingly known as stations.

The word station is also a traditional Australian English term to denote a large and/or important landholding for any agricultural purpose.

The term "outstation" has been used historically to mean a subsidiary homestead or other dwelling on a large cattle or sheep station, but since the 1970s has been used mostly to refer to the Aborginal settlements created as part of the outstation movement, also known as homelands.[3]

The term "playing for sheep stations" is used to denote a large or serious game.

Two well-known nineteenth century authors have written about life on a sheep station: