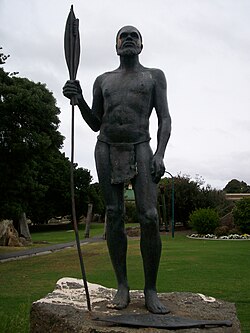 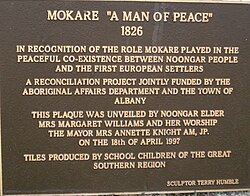 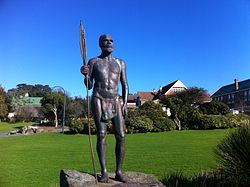 Mokare (c. 1800 - 26 June 1831) was a Noongar man, an Aboriginal man from the south-west corner of Australia, who was pivotal in aiding European exploration of the area. Mokare had two known brothers: Mollian (d. 1829), who may have been known as Yallapoli, and Nakina, who with Mokare, was a frequent visitor to the Albany settlement, staying with the government resident, Alexander Collie. He also was recorded as having a married sister.

Possibly first recorded as the charismatic "Jack" recorded by Phillip Parker King in his expedition to King George Sound in 1821, Mokare was from the Minang clan of Noongar. With the arrival of Major Edmund Lockyer in the brig Amity, in 1827, he showed the Europeans the walking trails that the Noongar people had used and maintained over generations in the Albany region. Many of these are today the roads of that region of Australia. He became a close friend of the surgeon-assistant J. S. Nind, with whom he frequently visited. In December 1829 Mokare guided Thomas Braidwood Wilson's overland expedition during which Mount Barker and were named, as well as Hay River, Denmark River and Wilson Inlet. Two months later he served again as the guide for Captain Barker's expedition over the same area. As there was no competition between Europeans and Aboriginal people for land, women or hunting, the settlement in Albany was particularly peaceful.

Mokare was well known in his short life for being a peacemaker, and an effective mediator between black and white communities. He was concerned when Stirling took command of the Albany settlement in 1830, as he had heard of the battles and massacres between European settlers and Aboriginal people, and wished Albany to be maintained as a separate settlement.

Mokare died on 26 June 1831. The Noongar people and Europeans had assembled at Collie's house and walked to a site selected by Nakina where the Europeans dug a grave and Mokare was interred with a buka cloak and personal artefacts to Nakina's specifications.[1] When Collie himself was dying from tuberculosis in 1835, he asked to be buried alongside Mokare. Their graves are together beneath Albany Town Hall. Four years after Mokare's death, the surveyor John Septimus Roe had his body exhumed and re-interred at the newly established Albany Cemetery.

A park consisting of native bushland on the northern side of Mount Melville in Albany was named after Mokare in 1978.[2] A statue was erected in Alison Hartman Gardens on York Street in the centre of Albany in 1997 as part of a reconciliation project.[3]

Mokaré's portrait was also sketched by Louis-Auguste de Sainson in 1826. It appears in colour with his name on the bottom right-hand corner of plate 8 of Dumont d’Urville, Voyage et découvertes de l’Astrolabe..., Atlas, 1833.