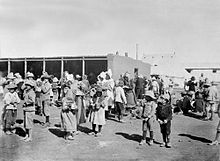 Internment is the imprisonment of people, commonly in large groups, without charges[1] or intent to file charges.[2] The term is especially used for the confinement "of enemy citizens in wartime or of terrorism suspects".[3] Thus, while it can simply mean imprisonment, it tends to refer to preventive confinement rather than confinement after having been convicted of some crime. Use of these terms is subject to debate and political sensitivities.[4] Internment is also occasionally used to describe a neutral country's practice of detaining belligerent armed forces and equipment on its territory during times of war, under the Hague Convention of 1907.[5]

Interned persons may be held in prisons or in facilities known as internment camps, also known as concentration camps. The term concentration camp originates from the Spanish-Cuban Ten Years' War when Spanish forces detained Cuban civilians in camps in order to more easily combat guerrilla forces. Imperialist powers over the following decades continued to use concentration camps (the British during the Second Boer War and the Americans during the Philippine–American War).

This article involves internment generally, as distinct from the subset, the extermination camps, commonly referred to as death camps. The label concentration camp is often additionally used for the latter, such as those created by German forces during the Herero and Namaqua genocide, Italian forces during the Italian colonization of Libya, Nazi concentration camps during World War II, and Soviet gulags in operation into the 1980s.

The Universal Declaration of Human Rights restricts the use of internment, with Article 9 stating, "No one shall be subjected to arbitrary arrest, detention or exile."[6]

Ten thousand inmates were kept in El Agheila, one of the Italian concentration camps in Libya during the Italian colonization of Libya 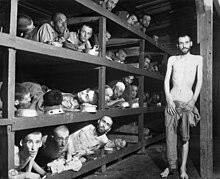 Jewish slave laborers at the Buchenwald concentration camp near Weimar photographed after their liberation by the Allies on 16 April 1945. Elie Wiesel is seen second row from bottom, seventh figure from the left.

The American Heritage Dictionary defines the term concentration camp as: "A camp where persons are confined, usually without hearings and typically under harsh conditions, often as a result of their membership in a group which the government has identified as dangerous or undesirable."[7]

During the 20th century, the arbitrary internment of civilians by the state reached its most extreme forms in the Soviet Gulag system of concentration camps (1918–1991)[13] and the Nazi concentration camps (1933–45). The Soviet system was the first applied by a government on its own citizens.[10] The Gulag consisted in over 30,000 camps for most of its existence (1918–1991) and detained some 18 million from 1929 until 1953,[13] which is only a third of its 73-year lifespan. The Nazi concentration camp system was extensive, with as many as 15,000 camps[14] and at least 715,000 simultaneous internees.[15] The total number of casualties in these camps is difficult to determine, but the deliberate policy of extermination through labor in many of the camps was designed to ensure that the inmates would die of starvation, untreated disease and summary executions within set periods of time.[16] Moreover, Nazi Germany established six extermination camps, specifically designed to kill millions of people, primarily by gassing.[17][18]

The former label continues to see expanded use for cases post-World War II, for instance in relation to British camps in Kenya during the Mau Mau Uprising (1952–1960) for holding and torturing Kenyans,[19][20] and camps set up in Chile during the military dictatorship of Augusto Pinochet (1973–1990).[21] Today, some media reports have claimed that as many as 3 million Uyghurs and members of other Muslim minority groups are being held in China's re-education camps which are located in the Xinjiang region and which American news reports often label as concentration camps.[22][23] The camps were established under General Secretary Xi Jinping’s administration.[24][25]