During the latter part of the 1960s, the Metropolitan Regional Planning Authority developed the Corridor Plan for Perth which was published and adopted in 1970.[2] The plan called for the creation of five "sub-regional" retail centres (Fremantle, Joondalup, Midland, Armadale and Rockingham) which would form the commercial and economic focus of each "node", and take the retail burden away from the CBD.[3] The Corridor Plan was not endorsed by Parliament until 1973.[4][5]

In order to grow both the five "sub-regional" retail centres and these off-corridor regional shopping centres, a Retail Shopping Policy was developed by MRPA in 1976, and a Perth Metropolitan Region Retail Structure Plan was put in place to regulate the industry. This Plan was amended as new centres were required.[4] A review of the Corridor Plan in 1987 found that the sub-regional centres had failed to adequately compete against the regional shopping centres in the middle-distance suburbs.[4]

Most of the land in the area remained largely undeveloped until the 1960s, and Joondalup started to become the "city of the north" towards the late 1980s to the early 1990s when houses and businesses were established in the area. Joondalup is the key regional hub for the north of Perth, a status confirmed by the Western Australian State Government's new Directions 2031 strategy which names Joondalup town centre as one of two Primary Centres for the Perth metropolitan area.

The city is named after Lake Joondalup. The name Joondalup is a Noongar word, first recorded in 1837 and possibly meaning either "place of whiteness or glistening", or "place of a creature that can only move backwards".[6]

Joondalup is bounded by Burns Beach Road to the north, Mitchell Freeway to the west, Eddystone and Lakeside Drive to the south and Lake Joondalup to the east. Grand Boulevard and Joondalup Drive run through the centre of the suburb. Most of Joondalup consists of commercial and residential zones, although a suburban area exists between Moore Drive and Burns Beach Road near Currambine train station, and some small residential estates have been built along Lakeside Drive. The Yellagonga Regional Park and a small bushland corridor near the TAFE and university campuses are located in the east and south.[7]

The Western Australia Police Force has a police station based in Joondalup.[10] The WA Magistrates Court has a metropolitan court based in Joondalup that deals with both criminal offences and civil claims for debt or damages and non-offences.[11]

Joondalup is home to the Joondalup Festival, an annual event that takes place in the CBD featuring markets, music, fashion, street arts, fairground rides and street parades.[12] The festival is free-of-charge and attracts people from all over the Perth metropolitan area. Kaleidoscope Festival has also been held in the city since 2016, featuring various art and light installations. The festival attracted over 50,000 people in its inaugural year.[13]

The city has a number of parks including Central Park and Neil Hawkins Park in the Yellagonga Regional Park. The Neil Hawkins Park is home to many parrots (including the Australian ringneck), cockatoos and kangaroos. The park is located alongside Lake Joondalup and wetlands which stretches out between Burns Beach Road to the north and Ocean Reef Road to the south. These wetlands provide refuge for migratory birds. Joondalup's coastal front consists of Burns Beach in the north and Beaumaris Beach in Ocean Reef, running onto the Ocean Reef Boat Harbour in the south. 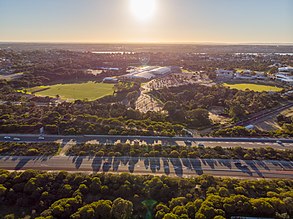 Looking east over the Mitchell freeway at the HBF Arena

Joondalup is home to ECU Joondalup SC, Joondalup United FC and Sorrento FC who play in the National Premier Leagues which is Australia's second tier association football league. Sorrento FC is one of Joondalup's most successful clubs and their derbies with ECU Joondalup are always eagerly anticipated.

Arena Joondalup, (also known commercially as HBF Arena) located northwest of Lakeside Shopping Centre, is the home venue of West Perth Football Club and Wanneroo Basketball Association. The Arena also hosts music events and festivals during the year, as well as the Home and Lifestyle Expo, an annual exhibition held in late March to early April.

Furthermore, in the early 1990s with the addition of the Western Reds to the National Rugby League, the Joondalup Giants was established playing home games from Admiral Park in WARL completion.

Joondalup is a popular city for nightlife on weekends and Friday nights, with most of its pubs and nightclubs located in close proximity to each other in the CBD. The CBD contains two major nightclubs, Crush and Dusk, as well as four pubs around the city, The Old Bailey, the Grand Boulevard Tavern, The Sovereign Arms. Joondalup was granted the status of "tourism precinct" by the State Government in 2009, allowing extended retail trading hours.

The Joondalup suburb is a major location for tertiary education in the northern suburbs and is known as the Joondalup Learning Precinct. The North Metropolitan TAFE has a campus in Joondalup providing state government education to meet the demands of students wanting to enter the workforce with up-to-date, industry-specific, practical skills. It was previously called the West Coast Institute of Training. Edith Cowan University has a major campus based in the suburb. It offers graduate and post graduate degrees on the campus that also includes, libraries, guilds, commercial shops, sporting facilities, and student housing. Situated in the same Joondalup Learning Precinct as ECU and the TAFE campuses is the West Australian Police Academy. The Western Australia Police's training academy was moved from Maylands to Joondalup and was officially opened on 15 February 2002.[14] The suburb also contains Joondalup Primary School and Lake Joondalup Baptist College. 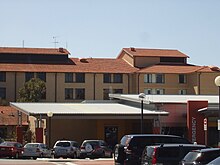 Joondalup contains a major public hospital, Joondalup Health Campus, which serves as the main health facility for most of Perth's northern suburbs, as far north as Two Rocks. Joondalup Private Hospital is also incorporated into the public Health Campus, and both facilities are owned and operated by Ramsay Health Care.

The Joondalup region's primary potable water supply comes from the nearby Gnangara Mound. The water is treated at the Wanneroo Groundwater Treatment Plant and, as in most of Western Australia, is managed by the Water Corporation.

The suburb of Joondalup has three interchanges to the State Route 2, Mitchell Freeway on Hodges Drive, Shenton Avenue and Burns Beach Road. The other major route through the suburb is State Route 85, Joondalup Drive which leads to the Tonkin Highway and when completed, the Brand Highway and Great Northern Highway.

There are two types of bus services in the suburb. A free service called the CAT buses (routes 10 and 11) which travel a circular route around Joondalup's central area, ferrying passengers to Joondalup Health Campus, Edith Cowan University, North Metropolitan TAFE and Joondalup CBD, among other destinations. The residential part of the suburb to the north is serviced by the Transperth buses on routes 468 (Whitfords station to Joondalup station) and 473 (Kinross to Joondalup station).