This is a list of the heads of state of Nigeria, from Nigeria's independence in 1960 to the present day.

From 1960 to 1963 the head of state under the Nigeria Independence Act 1960 was the Queen of Nigeria, Elizabeth II, who was also monarch of the United Kingdom and the other Commonwealth realms. The Queen was represented in Nigeria by a Governor-General. Nigeria became a federal republic under the Constitution of 1963 and the monarch and Governor-General were replaced by a ceremonial President. 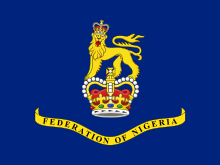 Standard of the Governor-General of Nigeria

Under the 1963 Constitution, the first constitution of the Republic of Nigeria, the President replaced the monarch as ceremonial head of state. The President was elected by Parliament for a five-year term. In the event of a vacancy the President of the Senate would have served as Acting President.

Major Chukwuma Kaduna Nzeogwu led a coup d'état in 1966 which overthrew President Azikiwe and his government.

Under the 1979 Constitution, the second constitution of the Republic of Nigeria, the President was head of both state and government. The President was elected by for a four-year term. In the event of a vacancy the Vice President would have served as Acting President.

Following the annulment of the 1993 Nigerian presidential election which terminated the transition to the Third Nigerian Republic. In August 1993, Babangida resigned from office. He signed a decree establishing the Interim National Government led by Ernest Shonekan. Babangida made the interim government weak by placing it under the control of the military.

In November 1993, General Sani Abacha overthrew the interim government, and ruled the country with an iron fist. In 1998, following Abacha's death, General Abdulsalami Abubakar became head of state and ushered in the Fourth Nigerian Republic.

Under the fourth Constitution of the Republic of Nigeria, the President is head of both state and government. The President is elected by for a four-year term. In the event of a vacancy the Vice President serves as Acting President.