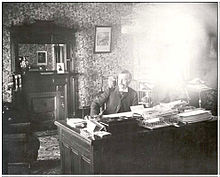 Standard of the Lieutenant Governor of Saskatchewan

Standard of the Lieutenant Governor of Saskatchewan from 1906 to 1981 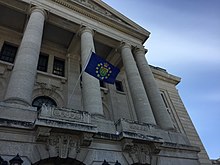 The Vice Regal Standard over the Saskatchewan Legislative Building at the Installation of W. Thomas Molloy

It was in 1929 that the Lieutenant Governor of Saskatchewan's personal discretion was required in the exercise of the Royal Prerogative, when Henry Newlands had to select a new Premier after James Garfield Gardiner lost the confidence of the Legislative Assembly and the opposing Progressive Conservative Party had managed to form a coalition with the Progressive Party and independent members of the assembly.[7] With the election in 1944 of the Co-operative Commonwealth Federation Party to a majority in the Legislative Assembly, the Office of the Lieutenant Governor in Saskatchewan was targeted for spending cutbacks. Government House was closed and the viceroy given only a small office at the Hotel Saskatchewan as a replacement, and guards of honour and playing of the Viceregal Salute were dispensed with. This trend continued, due to lack of initiative rather than hostility towards the Crown, until the 1980s when the viceroy's honours were restored and Government House was saved from demolition.[7]