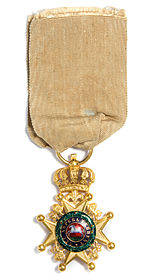 Badge of the Royal Guelphic Order

Grave of Lieutenant Colonel Ernst Poten (1785–1838) of the Royal Hanoverian Army. The inscription lists the Royal Guelphic Order among other awards and honours.

Flag of the Electorate of Hanover, 1692

The Royal Guelphic Order (German: Guelphen-Orden), sometimes also referred to as the Hanoverian Guelphic Order, is a Hanoverian order of chivalry instituted on 28 April 1815 by the Prince Regent (later King George IV).[1] It takes its name from the House of Guelph, of which the Hanoverians were a branch.

After the defeat and forced dissolution of the Kingdom of Hanover by the Kingdom of Prussia, the order continued as a house order to be awarded by the Royal House of Hanover. Today, its current Sovereign is the Hanoverian head of the house, Ernst August, Prince of Hanover. The honour is named after the House of Guelph to which the Hanoverian kings belonged, and its insignia were based on the white horse of that kingdom's arms.

In the United Kingdom it has always been regarded as a foreign order, and even before 1837 members of the order were not entitled to style themselves as "Sir" unless they were also created Knights Bachelor, as many were.

The Order includes two Divisions, Civil and Military. It originally had three classes, but with several reorganizations since 1841, as house order today it has four classes and an additional Cross of Merit. In descending order of seniority, are:

Holders of the respective degrees of the order in Britain were entitled to be post-nominally addressed with the initials, which stand for Knight Grand Cross of Hanover, Knight Commander of Hanover and Knight of Hanover. The initial GCG was also used, and held to be more correct.[2]

The first six officers were: