Dr Bray was born in Adelaide, South Australia, the elder son of Harry Midwinter Bray (1879–1965), an Adelaide stockbroker, and his wife, Gertrude Eleanore Stow (members of whose family were Congregationalist missionaries in South Australia). His father's family had a history of involvement in South Australian politics and current affairs: Bray's grandfather was the Honourable Sir John Cox Bray, a former Premier of South Australia. On his mother's side, Bray claimed a collateral relationship to the third U.S. president, Thomas Jefferson.

Bray was an active member of the Libraries Board of South Australia between 1944 and 1989. He was closely involved with the organisation of the early Adelaide Festival of Arts Writers' Weeks. (His first volume of poetry was launched at the second Writers' Week in 1962.)[1]

Bray was made a Companion of the Order of Australia in 1979, and is said, by his younger brother, Dr Robert Stow Bray, to have refused a knighthood. He described his views as "æsthetic - traditional; social - emancipated; political - fluctuating" and his philosophies as "sceptical, some tendencies to Platonism". 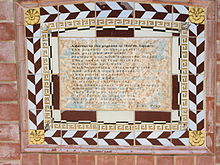 "Address to the pigeons in Hurtle Square", a poem by Bray, features on the western face of the John Jefferson Bray Memorial Fountain in Hurtle Square, Adelaide, where he once lived.

The John Jefferson Bray Memorial Fountain in Hurtle Square, Adelaide, was commissioned by the Adelaide City Council in 1994.[1]

The John Bray Poetry Award, awarded biennially as part of the Adelaide Festival, was so named to honour his distinguished services to Australian poetry.[2]

Bray's publications reflected his interests which he listed as "poetry, history, classics":

He also made contributions to: