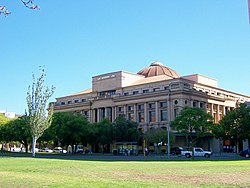 The Sir Samuel Way Building, the main seat of the District Court of South Australia, as viewed from Victoria Square, Adelaide.

Jurisdiction and appointment of judges

Judges of the District Court are appointed by the Governor of South Australia on the advice of the Executive Council. Once appointed, they cannot be removed from office except by an address from both houses of the South Australian Parliament. They must retire when they reach the age of 70. Judges of the Employment Court, the Environment, Resources and Development Court, the Licensing Court and the Youth Court, as well as Masters of the Supreme Court, also formally hold office as District Court Judges. They are not listed on this page (except where they have also served as a District Court Judge).

The work of the Court is divided into four areas: civil, criminal, administrative and disciplinary, and criminal injuries. The District Court can hear most civil and criminal matters except for offences related to murder and treason. It also has jurisdiction over criminal injuries compensation claims. In the administrative and disciplinary division, the Court hears appeals from various government agencies, tribunals and disciplinary bodies. The Court is usually constituted of a single judge sitting alone or with a jury (in criminal trials only). In certain cases a judge may sit with two assessors who, with the judge, determine factual questions while the judge determines questions of law. For ceremonial occasions such as the swearing in of a new judge, the Court sits as a Full Court constituted of all available judges.

Current Judges of the District Court

(Date of appointment appears in brackets)