Unlike an Australian State Governor, the Administrator is not the direct representative of the Queen in the Territory but is instead appointed by the Queen's representative in the Commonwealth, the Governor-General, to administer the Territory in accordance with the Act. In practice, however, the Administrator performs a similar constitutional role to that of a state governor and can be considered the Queen's indirect representative in the Territory. This is light of the fact that territories are not sovereign in the same way as states, there being no 'Crown in right of the NT'.

The Administrator formally appoints the Chief Minister of the Northern Territory and the members of the Cabinet after every election. In all but a few cases, he or she is required by convention to act on the Cabinet's advice. The Administrator gives royal assent to all bills passed by the Northern Territory Legislative Assembly. Although the Governor-General (in practice, the Commonwealth Government) has the power to veto any territorial bill, in practice this right is almost never exercised.

The office of the Deputy of the Administrator was created in 1997.

In 2014, the Governor-General granted current, future and living former Administrators the title of 'The Honourable' for life,[3] following the lead of Governors-General and Governors of New South Wales in granting the title.[citation needed]

On 6 July 1863, land now known as the Northern Territory was annexed to the Colony of South Australia. Legislation regulating the sale of land in the Northern Territory which was given assent on 12 November 1863 included provision for both the appointment of a Government Resident and a description of the powers of this office.[5]

Commonwealth of Australia (1912 to present)

Administrators and Government Residents of the Northern Territory after transfer of control to the Commonwealth Government: 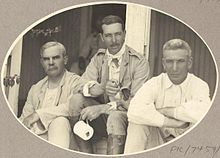 From 1926 to 1931, the Northern Territory was divided into the territories of Central Australia and North Australia, with the border at the 20th parallel south. Each territory was administered by a Government Resident located respectively in Alice Springs (then known as Stuart) and in Darwin. Both territories were reincorporated as the Northern Territory in 1931.[17][18]

Deputy of the Administrator (1997 to present)

The office of the Deputy of the Administrator was established in 1997.