Previous Next
Suburb of City of Salisbury, South Australia

Ingle Farm is an established, residential suburb, with some parklands, of about 8,500 people in the South Australian capital city of Adelaide. It is located at the base of the Mount Lofty Ranges foothills, around 12 kilometres north-east of Adelaide's central business district. It covers an area of 4.47 km2 with a population density of 19.41 people per hectare in 2001.

James Rowe arrived in South Australia 22 Apr 1837 on the "South Australian",[2] spending two years on Kangaroo Island[3] then settling with his family in the Ingle Farm area in 1848.[citation needed] They initially took up 100 acres (0.40 km2) in section 3030, Hundred of Yatala in 1849,[citation needed] using the land primarily for farming wheat, barley, peas and hay. James Rowe's grandson, Jabez Sleeman Rowe (1871-1955),[4] took on the farm and married Martha Barbara Wright (1868 - 1943),[4] from Inglewood in 1902[4] consequently naming the farm Ingle Farm. In 1959, the South Australian Housing Trust purchased 730 acres (3.0 km2) from the Rowe brothers, Cyril (married to Alice) and Slem (married to Jean) Rowe and started a housing estate,[5] with the first Housing Trust homes built in 1965[6] and 2,500 houses completed by 1975. The Rowe family name is preserved in the naming of Rowe Park, next to Ingle Farm Primary School, and Rowe Street in the adjoining suburb of Para Hills.

Rowe Park in the suburb's south, is home to the Ingle Farm Sporting Club. The club fields teams in Australian rules football, Cricket, Golf, Netball, Softball and some indoor sports. The club was originally known as the Ingle Farm Football Club, from its formation in February 1968, and was renamed in 1993. The football club first competed in the Central Districts Football Association, transferred to the Norwood-North Association in 1974, then to the South Australian Amateur Football League in 1978.[7]

Walkleys Park in the suburb's north-east is home to Ingle Farm Amateur Soccer Club who take part in the SAASL Sunday Competition. The club was formed in 1973 and has played at Fairfax Road, Ingle Farm since 1979. Green and white have been the club's colours since its inception. The club currently has 7 teams: 1st Team, Reserves, C Team, C2 Team, C3 Team, Over 35's and Women's. IFASC has been successful in the past 13 years winning many trophies including SAASL Sunday Premier League, SAASL Division 2 and 3 leagues. The club also won the SAASL Challenge Cup in 2009 and 2015 beating more than 80 local clubs to the trophy.[8]

In the 2006 Australian Bureau of Statistics Census of Population and Housing, the population of the Ingle Farm census area was 8,474 people, in an area of 4.47 km2. Females outnumbered males 50.4% to 49.6%. Some 25.7% of the population was born overseas. Ingle Farm has experienced a decreasing population since 1996 resulting from few new houses being constructed and a general decrease in the average number of people living in each house.[9]

The oldest of the 3 primary schools in the area is Ingle Farm East Primary School (Halidon Street), which opened in 1970 and in 2007 had 289 students enrolled.[10] North Ingle Primary (Rothwell Avenue) opened in 1973. Since its opening the enrolments steadily grew until it hit a peak of approximately 500 students in the late 70's and early 80's but currently is now only about 150.[11] Ingle Farm Primary School (Belalie Road) was established in 1992 after the amalgamation of Ingle Farm Central Primary, Ingle Heights Primary and the old Ingle Farm Primary School. It has the highest enrolment level of the three primary schools with 465 students in 2007. It offers a large number of New Arrivals classes for migrants and students with special needs, currently accounting for approximately half of the enrolments.[12] Ingle Farm Primary School is located at the old Ingle Farm High School site. Ingle Farm High School was open from 1975 to 1991 and amalgamated with Para Vista High to form Valley View Secondary School. 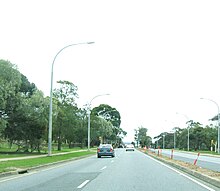 A substantial retail and community services zone is located on the south-western corner of the junction of Montague Road and Walkleys Road. Designated by the Metropolitan Adelaide Development Plan as a "District Centre" (second tier in a four tier hierarchy)[13] this zone includes Ingle Farm Shopping Centre (a Colonial First State Property Management property)[14] as well as medical, recreation, aged care and child care facilities.

According to the 2006 Census, approx 85% of residents travelled to work by car as driver or passenger, with a further 7% using public transport. Public transport in Ingle Farm is extremely well serviced by Adelaide Metro. Services travel to the Adelaide CBD and nearby northern and north eastern suburbs. Destinations along these routes include the Ingle Farm Shopping Centre, Ingle Farm Primary School, Helping Hand Aged Care facility, Ingle Farm Library and Assemblies of God Church on Baloo Street, Ingle Farm.

Ingle Farm is part of the state electoral district of Florey and had voted strongly for the Australian Labor Party, with the district mostly remaining a safe Labor seat until the 2018 election where it was won by ex Labor but now Independent Frances Bedford.