Gypsy Moths over West End, Davies Park oval below, Yeronga is to the left of the top wing of the front aircraft, 1933 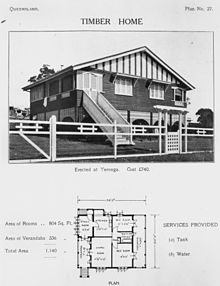 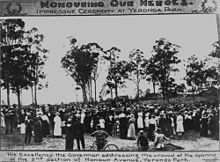 Honouring our heroes at Yeronga Park, published in The Queenslander, 27 July 1918

In the playground at Yeronga State School, 1923 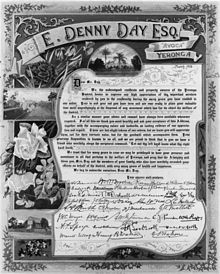 Illustrated address presented to E. Denny Day, Esq., of Avoca at Yeronga, 1913. The address was presented by the residents and property owners of the Yeronga District expressing appreciation for services rendered by E. Denny Day (General Manager of the Royal Bank of Queensland) to the community of Yeronga. The address depicts Mr Day's home, Avoca, which was located a few hundred yards from the Yeronga Railway Station (Description supplied with photograph)

Yeronga is a residential suburb of the City of Brisbane, Queensland, Australia located on the Brisbane River 7 kilometres (4.3 mi) south of the Brisbane central business district.[3]

The name Yeronga is thought to be either derived from the Aboriginal words yarung (meaning sandy or gravelly) and ba (meaning place), or that it derives from the name of the house Yerong-lea, the residence of Charles Hardie Buzacott.[3]

The first inhabitants of the Yeronga area were the Jagera people, whose traditional country is the south side of the Brisbane River.

In 1823 the first Europeans passed through the Brisbane region, being the former convicts, then timber getters, Thomas Pamphlett, John Finnigan and Richard Parsons. Their journey around the Moreton Bay area following being blown off course by a cyclone is an epic story in itself. Suffice to say that in their attempt to walk north along the coastline to Sydney (they thought the cyclone had pushed their boat south of Sydney) they followed the south bank of the Brisbane River (around May 1823) upstream through Yeronga to Oxley Creek (originally named Canoe Creek), where they found a bark canoe and used it to travel further north. The present Pamphlett Bridge at that spot honours the member of the party who could swim, as the canoe was on the west bank of the creek.

The explorer John Oxley sailed into Moreton Bay in November 1823 but didn’t see the entrance to the Brisbane River due to the extensive mangrove forest there at the time. He then sailed north and encountered Pamphlett and Finnegan around Bribie Island (Parsons had continued north to the Noosa area). Finnegan then guided Oxley to the entrance of the river, where he sailed upstream as far as Goodna. Thus whilst Oxley is traditionally credited with the discovery of the Brisbane River (and Canoe Creek was renamed in his honour), but for his encounter with Pamphlett and Finnegan he may never have known it was there.

Following the establishment of the Moreton Bay Penal Colony at the site of what is now the Brisbane central business district in 1825, and the opening up of the area to free settlers in 1842, European settlement spread from that site.

The first recorded land sale at Yeronga occurred in 1854, with 154 acres (~62 hectares) being purchased by Edward Cooke and TLM Prior.[4] Being part of NSW at that stage, the contract was sent to Sydney and has not been located. After Queensland became a separate colony in 1859, a second land sale of 100 acres (~40ha) occurred in 1861. When local government was established, Yeronga became part of the Stephens Shire Council area. This and other councils amalgamated to form the Brisbane City Council in 1925.

Yeronga was originally used for agricultural purposes, and dairy farms were established, especially on the fertile riverside and adjacent floodplains. Crops recorded as grown in the area were cotton, sugar, maize, potatoes and arrowroot. Urban residential settlement first occurred along Fairfield Road, and especially around Station Avenue (now Kadumba St) once the railway opened.

A small coal mine was established near Newcastle St but appears to have been quickly mined out.

In July 1884, 180 subdivided allotments of "Yeronga Estate", were auctioned by Simon Fraser & Son Auctioneers. A map advertising the shows the estate to be adjoining the Yeronga Railway Station.[5]

In 1917, 30 subdivided allotments of "Avoca Estate" were auctioned by Webb & Webb Auctioneers. A map advertising the auction shows the estate is close to Yeronga railway station.[6][7]

In November 1920, 17 business and residential subdivided allotments of "Gilbert Estate, Yeronga", were auctioned by A. M. Newman, Associate Auctioneer. The auctioneer was acting under the instructions from trustees of the late Eli Gilbert. A map advertising the auction shows the estate adjoins the Yeronga Railway Station.[8][9]

In May 1923, 85 subdivided allotments of "River Park and Grimes Estate" were advertised to be auctioned by Cameron Bros. Auctioneers.[10][11]

In 1923 the Stephens Croquet Club was established in the Yeronga Memorial Park consisting of two lawns and a clubhouse.[12]

In August 1927, 9 subdivided allotments of "St. Olaves Estate, Yeronga", were auctioned by Isles, Love & Co. Limited Auctioneers. A map advertising the auction states that it is only a few minutes from the Yeronga Railway Station.[13]

The last farm in Yeronga was subdivided for residential use in the mid 1950s, and part of the north side of Hyde Rd became a light industrial area with the opening of the Taubmans (later Akzo Nobel) paint factory in 1952. A Sunbeam electrical appliances factory was later established on the corner of Hyde Rd and Cansdale St, and a warehouse and timber yard west of the paint factory. All have now closed, and the area is subject to a planning study to determine future (likely residential) redevelopment plans.

There were a series of lagoons adjacent to the river, and these were initially used as rubbish tips for the expanding area. Once the lagoons were filled, they were topped with clay and became parks. This explains the relatively large area of parkland, sports fields and open space adjacent to the river in Yeronga today.

A total of 16 streets in the Yeronga West area begin with the letter O, including Orvieto Road, Orsova Road and Oriana Crescent, locally known as the 'O zone'. Many of these streets appear to be named after ships and passenger liners owned by the Orient Line (later P&O), including the Orient, Orsova, Ormuz and Orcades. A list of Orient Line ships can be found here.

Four streets in Yeronga (including two forming a circuit) appear to have been named after prominent architects, being Dalton St, Grounds St, Seidler St and Utzon St.

Yeronga has a number of heritage-listed sites, including:

The median age of the Yeronga population was 34 years, 3 years below the Australian median.

Yeronga railway station on the Beenleigh line provides access (travelling south) to Beenleigh (and with a change of train, the Gold Coast) and (travelling north) Ferny Grove via the Brisbane central business district.

The opening of the railway from Corinda to the South Brisbane river wharves in June 1884 gave Yeronga improved access to the City (via the Victoria Bridge) and surrounding areas. The extension of the line to South Brisbane in 1891, and the connecting tram service, further improved access to the city. The opening of the Merivale Bridge in 1978 enabled trains to connect to Roma Street, Central and other city stations, though many people travelling to the south end of the City still detrain at South Bank station and walk over the Goodwill Bridge (pedestrian & bicycle only), or at South Brisbane station to walk or catch a bus over the Victoria Bridge. The railway through Yeronga was electrified in 1984, at which time a 30-minute service frequency was introduced. This increased to 15 minute frequency on 20 January 2014.

There are also two bus services that travel through the suburb, to the city and Indooroopilly.

Upon its creation the Brisbane City Council (BCC) became responsible for tram, and then bus public transport in its area. One of the first BCC bus routes was provided to Yeronga in 1940, known then as Route 7. This service to the City continues to be provided, known today as the Route 107. The Route 105 bus now provides an additional service to Indooroopilly.

The main commercial area is located on Fairfield Road, opposite the railway station, which is effectively the centre of the suburb. It provides services including a post office, fruit and vegetable store, butcher, bakeries, cafe, liquor shops, medical rooms, bicycle shop, pharmacy, dentist, newsagent, hair dresser, fashion shops, restaurants, real estate agent and fuel/convenience stores. There is also a neighbourhood shopping strip on Hyde Road with a cafe, restaurant, gourmet pizza, beauty saloon and hair dresser. Yeronga's many coffee shops are popular during the weekdays and weekends.[21]

In the mid 1980s Yeronga had two other neighbourhood shopping strips, one on the corner of Orsova and Orontes Roads (still operating), and the other on Anita Street. The Orsova Road shops included the Yeronga West Post Office, a pharmacy, hair dresser, real estate agent, butcher and convenience store. The first 4 businesses closed after the opening of the Fairfield Gardens Shopping Centre, the building then accommodating the Brisbane office of Little Athletics until 2016, when a gift shop (now a jewellers) and Italian restaurant became the new tenants. The butcher and convenience store have been replaced by a cafe and private medical office. The Anita Street shops included a convenience store, fruit and vegetable store, butcher and a Swiss restaurant, having since been demolished and replaced with houses.

The former Strophair's auction/retail complex on the corner of Venner Road and Cansdale Street has been redeveloped as a retirement village.

The Annerley-Yeronga branch of the Queensland Country Women's Association meets at the Annerley Yeronga Hall at 9 School Road.[23]

Yeronga is conveniently located near many educational institutions. It has a public High School (opened in 1960),[24] public primary school (opened 1867),[24] Catholic primary school and a kindergarten & preschool. The Yeronga Institute of TAFE was located adjacent to the High School, which is separated by Yeronga Memorial Park from the Primary School. The Eleanor Schonell Bridge connects nearby Dutton Park with the University of Queensland St Lucia campus.

The major flood events of the Brisbane River in 1887, 1890, 1893, 1907 and 1931[29] are not recorded as causing significant damage to Yeronga (the flood-prone areas of which were not extensively developed at those times), but the 1974 and 2011 floods caused extensive damage to many of the properties adjacent to the river and built in low-lying parts of the suburb. At the peak of these floods Hyde Road was blocked and Kadumba Street (which is built on a ridgeline) was the only major access to the western part of the suburb.