Wooloowin is a suburb in the City of Brisbane, Queensland, Australia.[3] 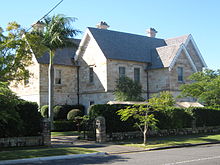 The origin of the suburb's name has been attributed to either the local Indigenous Australian term for a pigeon or the term for a species of fish.[3] It was the home of Brisbane's first Resident Judge, Alfred Lutwyche.

Kalinga was a residential district within Wooloowin. On 16 October 2015, Kalinga was officially gazetted as a suburb, having been excised from Wooloowin.[4]

Wooloowin has a number of heritage-listed sites, including:

Sites now in Kalinga but formerly in Wooloowin: