Wide Bay–Burnett is a region of the Australian state of Queensland, located between 170 and 400 kilometres (105 and 250 miles) north of the state capital, Brisbane. The area's population growth has exceeded the state average over the past 20 years, and it is forecast to grow to more than 430,000 by 2031. It is the subject of the Draft Wide Bay–Burnett Regional Plan, which aims to facilitate this growth while protecting over 90% of the region from urban development.[2]

Wide Bay was the name given by the early European explorer James Cook to a coastal indentation as he was sailing past Double Island Point. As the Port of Maryborough developed during the 19th century Wide Bay became well known as ships passed through the area before entering the Great Sandy Strait and the port.[3] 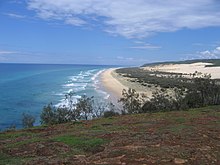 The coastal parts of the region are centered on the city of Maryborough. The inland is defined by a series of ranges which create the water of the Burnett River.[3] In the southeast of the region is a coastal area known as Cooloola.

1 Noosa is sometimes included in the region, especially by tourism authorities, but is formally excluded by both the ABS and the Queensland Government's Department of Infrastructure and Planning.

The island has rainforests, eucalyptus woodland, mangrove forests, wallum and peat swamps, sand dunes and coastal heaths. It is made up of sand that has been accumulating for approximately 750,000 years on volcanic bedrock that provides a natural catchment for the sediment which is carried on a strong offshore current northwards along the coast. Fraser Island is home to a small number of mammal species, as well as a diverse range of birds, reptiles and amphibians, including the occasional saltwater crocodile. The island is protected in the Great Sandy National Park.

The South Burnett is a peanut growing and wine-producing region on the western slopes of the Great Dividing Range, north of the Darling Downs. The Bunya Mountains mark the southern boundary of the region. 12 km from Murgon is the Bjelke-Petersen Dam. Other dams in the region include Gordonbrook Dam and Boondooma Dam. Tarong Power Station and the Tarong National Park are both in the south of the Burnett.

The area is dominated by the Cooloola sandmass. Fraser Island belong to the same sandmass.[5] It once extended 30 km to the east when sea levels were lower than today. Large vegetated sand dunes have formed a varied terrain noted for its scientific importance.[6] They contain the longest known chronosequence of coastal dunes in the world, covering 730,000 years.[6] The area was once part of the Shire of Cooloola until 2008 when the Gympie Region expanded.

James Nash reported the discovery of gold near Gympie on 16 October 1867. The railway from Maryborough completed in 1881 and the North Coast railway reached Gympie from Brisbane in 1891.[8] Bundaberg was named and surveyed in 1870.[9] In June 2000, a fire raged through a backpackers hostel, killing 15 backpackers.[10] In January 2013, Cyclone Oswald brought severe weather and flooding to much of eastern Queensland. Its impact was most severe in the Wide Bay–Burnett region with Bundaberg particularly hard hit by both flooding and tornadoes. 4,000 properties were damaged.[11] 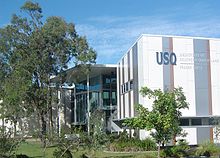 The region includes two universities: Central Queensland University at Bundaberg,[13] and the University of Sunshine Coast's Fraser Campus at Hervey Bay.[14] The operates from campuses at Bundaberg, Gympie, Hervey Bay and Maryborough, with the Maryborough campus .[15] A campus of Southern Queensland Institute of TAFE is located at Kingaroy.

The Bruce Highway links the region to Brisbane, Rockhampton, Townsville and Cairns, while the Burnett Highway and Isis Highway form part of an inland transport corridor to Toowoomba and central New South Wales.

Queensland Rail operates daily high-speed Tilt Train services to Gympie, Maryborough and Bundaberg. Public transport operated by Wide Bay Transit (Hervey Bay/Maryborough), Polleys Coaches (Gympie) and Duffy's City Buses (Bundaberg) connect at the railway stations. Public transport options for the inland areas are more limited, with buses linking the main towns to each other and Brisbane once a day, and once-weekly "shopper buses" in some towns.