On 1 January 2014, the Shire of Noosa was re-established independent of the Sunshine Coast Regional council.

Prior to 2008, the new Sunshine Coast Region was an entire area of three previous and distinct local government areas:

At the establishment of regional local government in Queensland on 11 November 1879 with the Divisional Boards Act 1879, most of the area was part of the Caboolture Division, while the northernmost part around Noosa was part of the Widgee Division centred on Gympie. The Maroochy Division split away from Caboolture on 5 July 1890. All three divisions became Shires on 31 July 1903 under the Local Authorities Act 1902.

In 1910, the Shire of Noosa split from Widgee, and on 22 February 1912 the Shire of Landsborough split from Caboolture.[3] The two new entities together with Maroochy were to remain fairly stable for almost 100 years.

On 19 December 1987, the Shire of Landsborough was granted City status, and was renamed the City of Caloundra,[4] reflecting the population boom in the coastal section of the City.

In July 2007, the Local Government Reform Commission released its report and recommended that the three local governments amalgamate. While it noted all three were "functioning councils with moderate to strong financial performance", it argued that they covered a self-contained region in a geographic, social and economic sense and that the advantages of coordinated planning in a high-growth area and the avoidance of duplication of facilities were arguments in favour of amalgamation. The councils opposed the amalgamation, and the Commission itself noted that the bulk of statewide individual submissions came from this region reflecting a "depth of feeling" regarding the issue.[5] On 15 March 2008, the City and two Shires formally ceased to exist, and elections were held on the same day to elect twelve councillors and a mayor to the Regional Council.

In the 2011 census, the Sunshine Coast Region had the 4th largest population of any local government area in Australia (following City of Brisbane, City of Gold Coast and Moreton Bay Region).[6]

The Region is divided into 10 divisions,[12] each represented by one councillor, plus an elected mayor who represents the entire Region. The council is elected for a four-year term.

The populations given relate to the component entities prior to 2008. The next census, due in 2016 and will not include the Shire of Noosa's census figures. 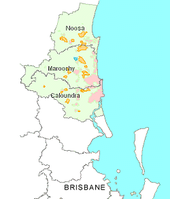 The Sunshine Coast economy is dominated by two sectors – Healthcare (including age-care) and Retail, which provide 30% of the regional employment.[13] Other significant areas are accommodation and food services, education, construction, manufacturing and professional services.[13] Efforts are being made to diversify the regional economy by the Sunshine Coast Regional Council.[14]

Local educational institutions, government and community groups have funded a number of initiatives to encourage entrepreneurial and innovative businesses to the area.[15] The University of the Sunshine Coast's Innovation Centre acts as an incubator startup companies, as does the Spark Bureau. The University site at Sippy Downs is designated as a 'Knowledge Hub' as part of the Queensland Government's South East Queensland Regional Infrastructure Plan and is master planned as Australia's first university town based on the UK models with the potential for over 6,000 workers in knowledge-based businesses.[16] Sippy Downs was highlighted as an 'Innovation Hotspot' in July 2010, by top European Business magazine CNBC Business, with the potential to be 'Australia's no-worries-answer to Silicon Valley'.[17]

The Sunshine Coast has many varied denomination, private and public primary and secondary schools (see List of schools in Sunshine Coast). The Lexis English group, providing English classes to international students, has a campus in Maroochydore, while Lexis TESOL Training Centres provides teacher training programs such as the Cambridge CELTA and TESOL.[18]

The Sunshine Coast University Hospital is the region's major hospital located in Birtinya, which opened in April 2017. The region's previous major hospital located in Nambour will be downsized and renovated, however it still operates as the coast's secondary hospital. Services remaining in Nambour General Hospital include emergency, cancer care, same-day and elective surgery, general medicine inpatient services, renal dialysis, outpatient services, medical imaging, pharmacy, diabetes services, oral health, allied health, mental health and breastcreen. There are smaller hospitals located in Caloundra and Maleny but, due to limited facilities at those hospitals, most cases are referred to the SCUH.

The car is the predominant mode of transport for Sunshine Coast residents, with the region connected to Brisbane via the Bruce Highway. The Nicklin Way and Sunshine Motorway are the major arterial roads, which pass through most major areas of the Sunshine Coast. Many intercity and interstate coach operators also operate daily bus services to Brisbane using the major corridors. 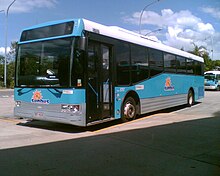 Sunbus services all the major centres on the Sunshine Coast

Flights from the Sunshine Coast depart from Sunshine Coast Airport, which is located 10 km (6.2 mi) north of Maroochydore, and fly direct to Sydney, Melbourne. Adelaide and Auckland with Jetstar, Virgin Australia, Qantas and Air New Zealand.

Bus services are operated by Sunbus, which operates under the TransLink public transport system. These buses connect the suburbs and localities within the Caloundra, Maroochydore and Noosa areas. Sunshine Coast Council operates zero-fare bus services throughout the coast to surrounding suburbs and major park and ride stations during the peak summer holiday period.

While much of traditional media has an online presence there has also arisen media organisations that are exclusively online. View News is one such organisation operating a news site for the Sunshine Coast concentrating on local news from the various Sunshine Coast communities.[citation needed]

The Sunshine Coast region is served by commercial, community and government radio stations. Commercial stations 91.9 Sea FM and 92.7 Mix FM are owned and operated by the EON Broadcasting one of Australias last independent broadcasters. Rival commercial operator Grant Broadcasters runs 91.1 Hot FM and Zinc96. The Government owned ABC services the region with 90.3 ABC Coast FM and ABC NewsRadio on 94.5 FM, Triple J on 89.5 FM and ABC Classic FM on 88.7 FM. Many community access stations, as well as some Brisbane stations, can also be received.

As of March 2016, the Sunshine Coast Region has the following sister cities:[29]

As of March 2016, the Sunshine Coast Region has the following friendship cities:[29]