Stafford is a northern suburb of the City of Brisbane, the state capital of Queensland, Australia.[4]

Stafford is predominantly a residential suburb, including some original Queenslander-style homes and a significant number of post-war Queensland Housing Commission homes on quarter-acre blocks built around the 1940s and 1950s. Stafford lies to the west of Lutwyche Road, along the banks of Kedron Brook. Being an area of that age, many of Stafford's residents are elderly, but there younger families are increasing there.[citation needed]

Stafford was originally called Happy Valley. It is possible that the name originates from the fact the Sir Thomas Brisbane for whom the city is named was an officer in the Staffordshire Regiment - a Stafford Knot is featured in the city's coat-of-arms. A public move to rename the area after the English county of Staffordshire in 1885 and 1886 led to its current name.[4]

In 1928, in what is now known as Stafford, 20 sites at Gourock Estate, Kedron, being resubs of 1 to 20 (subs A & B easements) of sub 1 of portion 96, Parish of Kedron, were advertised for auction by Isles, Love & Co. Auctioneers.[5][6] A map produced to advertise the sale shows the land for sale being off Main Stafford (or Happy Valley) Road, near Clifford St.[6]

Between 1940 and 1968 Stafford was served by electric trams operated by the Brisbane City Council. This was the last completely new tram line (as distinct from tram line extension) built in Brisbane.

One of the original large employers of local workers, Gibson's Tannery[7] (also known as Scotia Works), closed in 1982 to make way for the Stafford City Shopping Centre, which opened in 1983 and extended in 1997. Previously, the Stafford Road shopping strip at the tram terminus was the local centre. 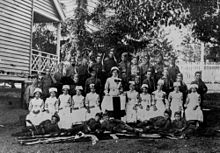 Group of children dressed up for a patriotic concert at Stafford State School, Brisbane, 1915

Stafford has a number of heritage-listed sites, including:

The Wilston Grange Australian Football Club has played Australian rules football at Hickey Park in Stafford since 1964.[9] The Past Brothers competes in the South East Division junior competitions, playing out of Gibson Park in Stafford.