The Shire of Murweh is a local government area in the Maranoa district, which is part of South West Queensland, Australia. The administrative centre and largest town in the shire is Charleville. In June 2018, the Shire of Murweh had a population of 4,318.[1] 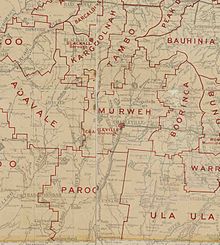 Bidjara (Bidyara, Pitjara, Peechara) is an Australian Aboriginal language spoken by the Bidjara people. The Bidjara language region includes the landscape within the local government boundaries of the Murweh Shire Council, particularly the towns of Charleville, Augathella and Blackall as well as the properties of Nive Downs and Mount Tabor.[2]

Murweh Division was created on 11 November 1879 as one of 74 divisions of Queensland under the Divisional Boards Act 1879 with a population of 1286.[3]

On 11 October 1883, there was an adjustment of boundaries between Tambo Division and Murweh Division.[4][5]

On 5 February 1889, the western part of Murweh Division was separated to create the new Adavale Division.[6][7][8]

On 21 March 1894, under the "Local Government Act 1878", Subdivision 2 of the Murweh Division was separated to create a municipality called Borough of Charleville.[9]

On 10 September 1960, the Town of Charleville (the successor of the Borough of Charleville) which had been separated from Murweh Division in 1894, was absorbed back into the Shire of Murweh .[10][11]

The Shire of Murweh includes the following towns and localities:

The first Murweh council chambers were built in the 1880s but were destroyed by fire in the 1930s.[13]

The new Murweh Shire Council Chambers were opened in Alfred Street in February 1938 by the shire chairman William Herbert Corbett.[13] The architects were Hall and Phillips and the contractor was T. E. Woollon of Brisbane.[14]