Sandgate is a northern coastal suburb in the City of Brisbane, Queensland, Australia.[3] In the 2016 census, Sandgate had a population of 4,909 people.[1]

The town became a popular escape for the people of Brisbane in the early 20th century. The suburb is a popular destination within Brisbane due to its coastline, Lovers Walk along the coast between Sandgate and neighbouring Shorncliffe and Moora Park and Beach.

Sandgate is situated on the coastline, along Bramble Bay. It is connected to the Queensland Rail City network. The western border of the suburb is marked by the Gateway Motorway. A large section to the west of the suburb is known as the Deagon Wetlands which is part of the North East Wetlands of Brisbane.[4]

The Turrbul people inhabited the seashore, the creeks and lagoons from Nudgee Beach to the Pine River. They were a branch of the clan of the Yugarabul speaking people. This larger clan inhabited the area from North Brisbane and along the coastline of Nudgee, Sandgate to Caboolture. In their language the local Turrbal clan called their coastal land "Warra" meaning "an open sheet of water".[5] This land is now calle Shorncliffe, Sandgate and Brighton. Their existence depended upon their knowledge of the seasons and their surroundings. Spears, nullas and boomerangs were used in hunting and woven nets for fishing.[6]

The British settlers originally called the area Cabbage Tree Creek (after the creek).[5][7]

The name Sandgate may have been inspired by Sandgate on the coast of county Kent, England by James Burnett, an early surveyor in the region.[8] Sandgate in Kent had a military camp, Shorncliffe Camp, on top of the cliffs adjacent to it. Sandgate in Brisbane also has an adjacent suburb called Shorncliffe.

Land in Sandgate became available in 1853,[5][9] allowing a small seaside settlement to develop. One of the first structures built at Sandgate was a Native Police barracks, from where officers such as the Frederick Wheeler conducted punitive raids against local aboriginals.[10]

On 25 May 1872, Robert Travers Atkin, a Member of the Queensland Legislative Assembly, died at Sandgate following an illness of some months. At his request, At his request, he was buried in Sandgate on the crest of the rise on which he had enjoyed sitting under the shade of the trees and looking out onto Moreton Bay. His will provided £50 to build a church beside his grave. This church was the first St Margaret's church (and is now used as the rectory).[11] A monument was erected to his memory by the members of the Hibernian Society of Queensland, of which he was vice-president.[12]

Sandgate Fire Brigade outside the fire station in 1923

In December 1879, allotments in the Town of Sandgate were auctioned by John Cameron.[14][15] A map advertising the auction states the land available was subdivisions 1 to 14, of allotments 8, 9, 10 and part of 7, Sec. 3, Town of Sandgate.[16] The map shows allotments bordered by Friday, Yundah and Kate Streets, now in Shorncliffe.

On 29 April 1880, Sandgate was proclaimed a municipality known as the Borough of Sandgate.[19] The Local Authorities Act 1902 replaced all Divisions and Boroughs with Towns and Shires, creating the Town of Sandgate on 31 March 1903.[20] This new status meant a town council was formed to guide the development of the local area. Initially, the council chambers were located in Shorncliffe. However, following a fire which destroyed the council chambers in 1910, a much larger town hall was opened in 1911. The Sandgate Town Hall was extensively renovated in 2011 to mark the 100th anniversary of the hall. The Sandgate Town Council, which operated from 1880 to 1925, had to provide a range of services for the growing community.[21] These included a fire department, ambulance, and sanitation facilities, as well as maintaining roads and regulating local development. In October 1925 the Town of Sandgate was amalgamated into the City of Brisbane.[20]

The coming of the railway in 1882 promoted more rapid development of the Sandgate area. Travel to Brisbane by train could be completed in less than half an hour.

On 12 August 1882 the Garden Estate, Sandgate was advertised for auction by James R. Dickson.[22] An estate map shows the 61 blocks making up the estate at the area bounded by Rainbow and Friday Streets.[23]

The Sandgate Baptist church opened on the corner of Cliff Street and Flinders Parade in 1887. It has since undergone multiple restorations, yet has continued to remain in its original structure. It is no longer operating as a church, being now used as a child care centre.

On 27 December 1920, 33 building sites in the Nashville Heights Estate were advertised for auction by Lyons & Coaldrake.[24] A map showing the allotments, which are in the area currently bounded by Alexandra Street, Nash Street, Darling Street and Borella Street, notes the blocks' proximity to the Sandgate Central Station, beach, state school and post office.[25]

Swimming at Moora park in 1937

Sandgate boasted clean beaches that were a popular weekend destination, with thousands of people visiting from Brisbane to escape the heat.[9] Boating, swimming and golf were the most common sporting activities. Moora Park was the location for dances and open-air films.[13]

The Sandgate Little Theatre Group was established in 1958. They perform in the Sandgate Town Hall. Now known as Sandgate Theatre Incorporated, this community theatre group hosts Brisbane's longest running community theatre festival, the Yarrageh Drama Festival, which is held in August and September each year at the town hall.[27] 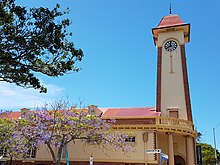 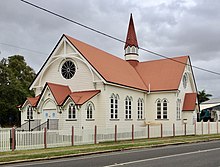 Sandgate has a number of heritage-listed sites, including:

Most of Sandgate's facilities are located along Brighton Road, the main street in Sandgate, which include numerous banks, shops, services and a small shopping centre anchored by a Woolworths supermarket. Woolworths previously traded adjacent to the site of the centre until the opening of the new store in February 2009. The old Woolworths site has been redeveloped as an Aldi supermarket, opened in December 2013.[33] The Sandgate railway station on the Shorncliffe line is a short walk from these facilities.

Sandgate has two schools, the Sacred Heart Primary School and Sandgate State School, both of which are within walking distance of the railway station.

The Sandgate & District Historical Society & Museum is at 150 Rainbow Street in a building that was formerly Mohoupts’ General Store and a local funeral business.[35]

In 2009, the Sandgate Post Office was relocated to other premises and the heritage-listed building was sold. It was subsequently renovated and is now operating as the 4017 Bar & Grill (4017 being the postcode for Sandgate).[28][36] Despite objection by some local members of the public, a McDonald's family restaurant opened opposite the 4017 Bar & Grill in 2014.

Recreational facilities in Sandgate include numerous parks, walking and bike tracks, and a municipal swimming pool on Flinders Parade. The Sandgate Golf Club is located in Allpass Parade, Shorncliffe.[37]

A number of sports teams represent the local area, including the Sandgate-Redcliffe Gators and Sandgate Football Club.

In 2005 Surf Connect Watersports Centre opened at 170 Flinders Parade. Other than kayak rentals, they introduced the sport of kitesurfing, windsurfing as well as standup paddling to the area. Sandgate is now a much more colourful and exciting village as a result of these water activities.

There is a popular and well-equipped Police and Citizens Youth Club (PCYC) located next to playing fields at the western end of Kempster Street. It runs regular Blue Light Discos and other social events, and is a centre for gymnastics, martial arts training and other sports.

Operating out of the PCYC is the Shorncliffe Pottery Club which started in nearby Shorncliffe over 30 years ago, and after some years at Sandgate Town Hall relocated to the PCYC. The club holds an annual exhibition named Expressions at Sandgate Town Hall each October, as well as participating with other local arts organisations, such as Sandgate Art Society (SasArt) and the Deagon-based Artrageous, in staging other art and culture events, including those which are part of the Bluewater Festival in the week before Easter each year.

The Brisbane to Gladstone Yacht Race starts from Shorncliffe Pier every Easter. It is the highlight of the popular Bluewater Festival of arts and cultural events held throughout the district.