Pinkenba is a coastal eastern suburb of the City of Brisbane, Queensland, Australia.[3] In the 2016 census, Pinkenba had a population of 368 people.[1]

Estate map of the Town of Pinkenba, Brisbane, Queensland, 1892

The name Pinkenba comes from the Turrbal word binkinba which means "place of land tortoise".[7]

The former suburb of Meeandah took its name from the now disused Meeandah railway station on the Pinkenbah railway line, which in turn is named after a corruption of the Greek word meander and refers to Serpentine Creek which flowed through the area (but has subsequently been converted into a drain due to the development of Brisbane Airport). The name is often thought to be an Aboriginal word.[8][9][10]

On 15 October 1892 there was an auction of crown land near a new meatworks.

Pinkenba Wharf was the point of embarkation for many World War I soldiers. The Pinkenba & District War Memorial commemorates those from the district who served and died in the war. The memorial was unveiled on 16 August 1919 by the Queensland Governor, Sir Hamilton Goold-Adams.[17][18] Qantas selected Pinkenba for its flying boat base in the 1930s. Until the war, Hamilton Reach was too congested, however the base eventually moved upstream providing better access for passengers.[19] 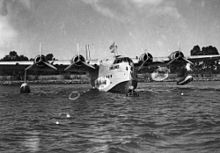 On 6 March 1963, Queen Elizabeth II unveiled a roadside memorial which commemorates the discovery of commercial quantities of oil in Australia.[22] Although significant oil deposits had been found at Moonie the pipeline to Brisbane was not completed until the following year. The site was selected because it was close to a large oil refinery which was to process the oil.[22]

In 1975 Myrtletown (then an independent suburb) was downgraded to a neighbourhood within Pinkenba.[4] Myrtletown was historically known as a residential and farming locality, though Myrtletown has become industrial and portside in recent decades.

As at March 2020, there are two cruise ship wharves for Brisbane, with differing facilities. Portside Wharf at Hamilton was completed in 2006 and is an international standard facility for cruise liners, offering restaurants, coffee shops, gift shops, and other facilities. However, due to the height restrictions of the Gateway Bridge and length restriction of 270 metres (890 ft) that far upstream, the larger ocean-going cruise liners must dock further down the river at the more industrial Multi User Terminal at the Port of Brisbane. In late 2020 the new will open on the northern bank of the Brisbane River in the suburb of Pinkenba opposite the port (27°22′52″S 153°09′15″E﻿ / ﻿27.3811°S 153.1542°E﻿ / -27.3811; 153.1542﻿ (Brisbane International Cruise Terminal)). The new cruise terminal is located at next to the Luggage Point Sewage Treatment Plant (which has been renamed the Luggage Point Resource Recovery Centre). The new terminal will be able to accommodate the largest cruise vessels in the world. It will be operated by the port but will not be part of the suburb of Port of Brisbane.[24]

The suburb is accessed by road via Kingsford Smith Drive which passes an industrial area before reaching the suburb. Pinkenba is also the site of the now-abandoned Pinkenba railway station. The station opened in 1882 and closed in 1993. The branch line to Pinkenba was constructed so as to encourage port development downstream away from the Brisbane central business district.[25]

BP's Bulwer Island Refinery and Shell's Pinkenba Terminal are located in Pinkenba. In 2011, Shells operations at Bulwer Island were expanded with the opening of a new bitumen and marine fuel import facility.[26] Shell facilities include their Queensland state office, a bitumen plant, a lubricants and grease manufacturing facility, several warehouses and fuel storage unit.[27]

Pinkenba has a number of heritage-listed sites, including:

Pinkenba has a historical trail which was designed on behalf of the Pinkenba Community Association and the Port of Brisbane with help from Brisbane City Council Neighbourhood planning team; more work is still to be done over the next[when?] ten years with the beautification of Pinkenba with the start being the local park and historical path and local pub.

Numerous development projects have been proposed for the area, including residential developments and an immigration detention centre, but nothing has progressed. The suburb contains a small number of detached houses (primarily of weatherboard construction), local store, pub and industrial precincts.