Petrie Terrace is an inner suburb of the City of Brisbane, Queensland, Australia.[3]

The suburb is less than 2 kilometres (1.2 mi) west of the Brisbane General Post Office. The precinct is bordered to the west by Hale Street and to the east by Countess Street. Its northern boundary is Musgrave Road and its southern is Milton Road.

The suburb takes its name from the road of the same name, which was in turn named after the pioneer Petrie family, headed by Andrew Petrie.[3]

In December 1876, portion 296, North Brisbane made up of 12 allotments were advertised to be auctioned by Mr John Cameron. A map advertising the auction shows the allotments located in Jessie Street, Petrie Terrace.[9]

Petrie Terrace has a number of heritage-listed sites, including:

In 2007-2008 the former Petrie Terrace Police Depot was converted to a retail precinct called The Barracks, which contains cinemas, restaurants, shops and offices with underground car parking. The heritage buildings have been incorporated in the development.[17] The Barracks has a walkway connection through to Roma Street railway station. 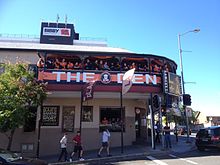 The Hotel LA (formerly the Lord Alfred Hotel) on Caxton Street. The hotel is a famous Brisbane Pub with a rich and colourful history since 1870 when it was established. The hotel was conveniently positioned opposite the Old Victoria Barracks (built in Petrie Terrace between 1864–74) to attract the military personnel. It caters as a "bar" for the younger set.

on Caxton Street, was originally built in 1884.

The Baroona Hall (otherwise known as the Caxton Street Hall and formerly the United Brothers lodge). The hall was constructed between 1883 and 1884 by the United Brothers Lodge, Manchester Unity Independent Order of Oddfellows. The lodge was established in 1873, to meet the needs of a large working class population without protection against injury, illness or other hardships. Baroona Hall is also associated with Brisbane architect, Richard Gailey as an example of his work and who designed many notable commercial and residential buildings including the Oddfellows Hall in Fortitude Valley and a Masonic Hall at Toowong. In 1918, the hall was leased to Isidor Josephson, a clothing manufacturer who built a substantial business which eventually extended to most other states. The hall was utilised by the lodge and the community for a number of years and the shops were continually occupied by a number of small businesses including bakers, stationers, hairdressers, bootmakers, drapers, and the Caxton Street Legal Services from 1976. A shop at the front was for many years, famously, the location of Tony Frangos, a traditional European style tailor. The Hall at the back was also an infamous live band venue where many Brisbane rock acts, as well as interstate acts played between 1975 and 1985. The building houses the "Velvet Cigar Strip Club".[18]

Since 1994 the Caxton Street Seafood and Wine Festival has been held on the Labour Day weekend.