Norman Park is located 6.3 kilometres (3.9 mi) by road east of the CBD. It borders East Brisbane, Coorparoo, Camp Hill, Morningside and Hawthorne, and is mostly residential.[4]

Norman Park is likely named after an early estate in the area. The estate is thought to have derived its name in the 1890s from the nearby Norman Creek, and the contemporary Governor of Queensland Henry Wylie Norman.[4][5] 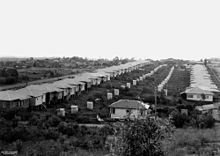 Norman Park, like many areas of Brisbane, was unsewered until the late 1960s, with each house having an outhouse or "dunny" in the back yard.

Norman Park began taking in the first settlers in 1853. One of the early Deeds of Grant was in 1854 to Louis Hope of land totalling about 40 acres.[6] Hope was a grazier and Ormiston Sugar Mill owner. Initially, development in Norman Park was slow and almost ceased after the 1893 Brisbane floods. Industries in Norman Park at the time included dairying, leather and brooms.

On Sunday 13 July 1924 Archbishop Gerald Sharp laid the foundation stone for the new brick Anglican Church of the Transfiguration at 40 Agnew Street to replace an earlier timber church.[8][9][10][11] On 26 October 1924 Archbishop Sharp officially opened the church, dedicating it as a World War I memorial.[12] Its final service was held on 25 February 2010.[13] As the church was heritage listed, it could not be demolished so it was sold for $2.4M and redeveloped with an extension as a private home.[14][15]

A major subdivision of 364 housing lots occurred in 1922 of the land formally owned by Louis Hope, however Norman Park remained a largely rural area until after World War II, when rapid development took place as the result of the construction of public housing.[4] In the 1940s and 1950s, extensive reclamation of land in the low-lying areas created parks and playing fields.

Agnew School opened in Agnew Street on 3 February 2003.[7][16] The school relocated to Wakerley in 2008 and, as at 2020, is known as the Brisbane campus of One School Global. It is supported by the Plymouth Brethren Christian Church.[17]

The 2011 Census recorded 6,003 residents in Norman Park, of whom 50.7% were female and 49.3% were male. The median age of the population was 33; four years younger than the Australian median.[citation needed]

The Cleveland railway line passes through the suburb, with Norman Park station located centrally. Trains operate at a 15-minute off-peak frequency and higher peak period frequency during weekdays, and a lower 30 minute frequency on weekends. This line has a long service span.

Norman Park Ferry Terminal is located off Wynnum Road in the suburb's north. The cross-river Norman Park Ferry provides direct access to New Farm Ferry Terminal, which is then serviced by the CityCat linear ferry line between Northshore Hamilton and The University of Queensland via the Brisbane central business district.

Despite the suburb being well serviced by three modes of public transport, no formal coordination exists between them aside from the TransLink (South East Queensland) fare structure and relatively high frequency standards. The suburb is situated within TransLink Zone 2, which makes it attractive to city commuters with respect to relatively cost-effective transit travel.

The suburb's terrain varies from flat on the Norman Creek floodplain in the suburb's south and west towards Coorparoo and East Brisbane, to hilly in the suburb's north towards Hawthorne and Morningside, and east towards Seven Hills and Camp Hill. Traffic conditions are busy along its major roads including Canara Street-Crown Street-Macrossan Avenue, Bennetts Road, and Wynnum Road. Recreational cycling opportunities are consequently limited on the north and east sides of the suburb. However, the presence of parkland between Norman Avenue and Norman Creek, including the Norman Creek Cycleway, provides for good opportunities on its south and west sides. As at February 2016 several citywide cycle routes pass through the suburb. This includes Wynnum Road, which has a shared pedestrian/bicycle path due to narrow traffic lanes, Canara Street-Crown Street-Macrossan Avenue, which is line-marked as a Bicycle Awareness Zone (yellow stencil stylized bicycle marked on edge of vehicle travel lane), and Bennetts Road, which has formal bicycle lanes south of Agnew Street. Packs of cyclists are commonplace along these routes early on weekend mornings.

The hilly terrain in the suburb's north and east sides, busy traffic conditions and bisection by the Cleveland railway line also impose some impediment to local walking opportunities. However, the semi-grid structure of the road and street network and the presence of urban borders (verges) on almost all roadways promote relatively direct and safe walking conditions. The higher order local streets and the major roads mostly have paved footpaths on one or both sides. The major roads contain numerous signalised intersections with pedestrian control, which are typically located adjacent to bus stops. Refuge islands support safe crossing of certain other roads and streets. In addition to local pocket parks, nearby recreational walking attractions include parkland and sporting fields along both banks of Norman Creek, rugby fields at C.P. Bottomley Park, Norman Park Ferry Terminal and Canning Bridge reserves on the south bank of the Brisbane River, and Balmoral Park in Morningside. Seven Hills Bushland Reserve is also located within walking distance of the eastern side of Norman Park. 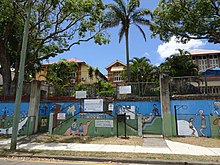 Norman Park has a number of heritage-listed sites, including: