New Farm is an inner northern riverside suburb of the City of Brisbane, Queensland, Australia.[3] In the 2016 census, New Farm had a population of 12,542 people.[1] 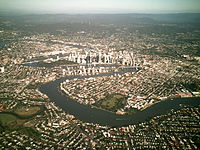 The suburb of New Farm including New Farm Park is located on the Brisbane River.

At the south-eastern end of the peninsula is the historic New Farm Park. Brunswick Street is the main street running northwest–southeast up the centre of the peninsula. To the south of Brunswick Street the suburb is characterised by large ornate Queenslander-style houses, shady streets lined with large trees and tall apartment buildings, predominantly along the river. More modest Queenslander-style houses dominate the north of Brunswick Street, where there are fewer large trees and apartments.

The suburb has one main commercial area close to New Farm Park, called 'Merthyr Village'. A wide variety of businesses also operate along Brunswick Street and in adjacent streets. The former electric tramway power station, located at the eastern corner of New Farm Park, has been converted into a community arts and performance space called 'The Powerhouse'. New Farm is known as Brisbane's "Little Italy" as many immigrants from Italian descent first settled in the suburb. The Brisbane City Council operates a public library at 135 Sydney Street.[6] The library opened in 1975 and offers publicly accessible Wi-Fi.[7]

Though one of Brisbane's oldest suburbs, the peninsula of New Farm was once called Binkinba (place of the land tortoises) by the indigenous Turrbal tribe of Brisbane.[8]

The suburb derives its name from the fact that the peninsula was used as a farming area in the early years of Brisbane's history.[9] Commandant Patrick Logan established a new farm in the area in 1827 as part of the Moreton Bay penal colony.[10] The area was also a working site of convicts (lime kilns dating back to 1870 are still evident on the river banks).[11]

Politician and judge Samuel Griffith built his house 'Merthyr' in the suburb in 1870.[10]

From 1885 to 1897 New Farm's transport needs were met by horse-drawn trams, which operated along Brunswick Street, as far as Barker Street. In 1897, the horse trams were replaced with electric trams and the line was extended, with trams ultimately running as far as Macquarie Street and down to the river at New Farm Park. The electric trams ceased operation on 13 April 1969. Since then the suburb has been served by diesel buses.

On 29 November 1919, on what is now known as New Farm, 24 river frontage subdivided allotments between Merthyr Road and Sydney Street, were advertised to be auctioned by Cameron Bros Auctioneers. A map advertising the auction indicated that the home of Sir Samuel Griffith was adjacent to the advertised lots.[14][15]

On 24 April 1920, on what is now known as New Farm, 5 allotments on Welsby Street were advertised to be auctioned on 27 April 1920 at 11am by Cameron Bros Auctioneers. A map advertising the auction indicated that the lots were close to the new tramway.[16][17]

On 6 May 1920, on what is now known as new Farm, 5 residential sites and 2 cottages were advertised to be auctioned on Monday 10 May 1920 by Cameron Bros Auctioneers. A map advertising the auction indicated that the lots and cottages were located between St Clair House and Heal Street.[18][19]

In 1923, the Catholic Church purchased a house to celebrate mass. The Holy Spirit Church opened on 1 June 1930, enabling the Sisters of Mercy to open the Holy Spirit School on 7 July 1930 in the house.[13] The house was replaced with a purpose-built school guilding costing £4,000. In September 1937 the new school guilding was blessed and opened by Archbishop of Brisbane, James Duhig.[20]

There was a marine base established in World War II and the suburb was home to many wealthy merchants and lawyers.[11]

New Farm developed a reputation in the late 1980s for street prostitution[21] and as a drug-addled, low-rent culture depicted in Andrew McGahan's grunge novel Praise, which is set largely in the suburb.

Since then, and like many Brisbane suburbs, New Farm has experienced much 'gentrification' and 'infill development' throughout the 1990s and the years since 2000. However, New Farm maintains its diversity, being known for its long-established Anglo-Saxon and Italian communities (as depicted in Venero Armanno's novel Firehead), and its many restaurants and cafes.

On 23 January 2007, part of the movie Fool's Gold, starring Kate Hudson, was shot at New Farm Park. Scenes from the films All My Friends Are Leaving Brisbane (2007) and Jucy (2011) have also been shot there.

At the 2011 census the suburb recorded a population of 11,330.[22] It has the highest population density in Greater Brisbane with approximately 5,861.7 people per square kilometre.[23]

New Farm has a number of heritage-listed sites, including:

The suburb has an eclectic mix of 19th century colonial homes, 20th century traditional Queenslander and modern architectural hybrids. As apartment, unit and duplex housing continues to exceed its share beyond 70%[37] of the local dwelling mix - detached housing is increasing in demand and price.[38]

By Bus The suburb is serviced by several bus routes to and from the city centre.

The Smart Cities: Rethinking the City Centre[39] report proposes building green bridges from Merthyr Road across the Brisbane River to Bulimba in the east and to Kangaroo Point in the west.

There are no secondary schools in New Farm; the nearest was Kelvin Grove State College[44] until the start of 2020 when the new Fortitude Valley State Secondary College opened.[45]