Mount Coot-tha is a mountain and a suburb of the City of Brisbane, Queensland, Australia.[2][3] In the 2016 census, there were no residents in the suburb.[4][1]

The mountain is 287 metres above sea level and has the highest peak within the urban footprint of Brisbane. It forms the eastern extent of the Taylor Range and is a prominent landmark approximately six kilometres (4 mi) to the west of the Brisbane central business district. Visible from much of the city, Mount Coot-tha is a popular bushland tourist destination including the Brisbane Botanic Gardens and Sir Thomas Brisbane Planetarium, as well as a mountain drive, bike trails, parks including a waterfall, and television and radio towers.[5] Mount Coot-tha is the source of Ithaca Creek.

Before the Moreton Bay penal settlement, Mount Coot-tha was the home of the Yugara Aboriginal people.[6] The Aboriginal people came to the area to collect 'ku-ta' (honey) that was produced by the native stingless bee.

In 1839, surveyor James Warner and his team cleared the top of the mountain of all trees except one large eucalypt tree. Because this tree could be seen from many other locations, they used as a trigonometric station to take surveying measurements. This led to the mountain's former name One Tree Hill.[7][8]

Coot-tha meaning Honey Mountain is a derivative of the indigenous term which replaced the name One Tree Hill when the area was declared a park in August 1883.[9] It was suggested by Henry Wyatt Radford, the Clerk of the Queensland Legislative Council.[2]

During World War II, the mountain was used as a military base by the RAAF and the US Navy. It was converted to a vast explosives depot and at one stage held more than 120,000 tonnes of explosive weapons. When darkness fell the lookout bristled with search lights in an amazing display as soldiers kept an eye out for enemy planes.anti-aircraft guns and searchlights were located on the lookout.[10] Mount Coot-tha was also the site of US Naval Ammunition Depot (Navy 134) supplying submarines at the at New Farm (Teneriffe) in Brisbane.[11][12]

On 24 May 1978 Sir Thomas Brisbane Planetarium officially opened in the grounds of the Brisbane Botanic Gardens.[14]

The Mount Coot-tha Library opened in 1975 at the Brisbane Botanic Gardens.[15] Unlike most branches of the Brisbane City Libraries, this library specialises in botany, horticulture, gardening and landscape design.[16]

Brisbane community television channel 31 Digital broadcast from the mountain from 1994 to 2017, after which it shifted to internet streaming under the new name of Hitchhike TV.[17]

On 20 November 2005, one of the Mount Coot-tha trails, the Currawong trail, was renamed the Kokoda trail in honour of the Australian soldiers who marched the Kokoda Track during World War II.

In 2017 It was proposed to build Australia's longest zip-line from the summit of Mount Coot-tha down to the Brisbane Botanic Gardens. Despite initially being approved by the Brisbane City Council, in April 2019 the new Mayor of Brisbane Adrian Schrinner decided to cancel the project due to the public protests.[18]

Mount Coot-tha has a number of heritage-listed sites, including:

Mount Coot-tha is one of Brisbane's most popular tourist destinations and is a popular stop with bus tours. Of particular note is the Lookout, which includes the Kuta Cafe, Summit Restaurant, and Gift Shop.

360-degree view of Brisbane City from the Lookout

Brisbane at night from the Lookout

The lookout, restaurant and cafe allow for panoramic views of the City. A function centre adjoins the restaurant. Well-known British astronomer Sir Patrick Moore gave a night-time public lecture about the stars of the southern hemisphere at the lookout in 1988, in conjunction with Patrick Moore being a guest speaker at a dinner of the Southern Astronomical Society at Toowong in Queensland.[21][22]

Sir Samuel Griffith Drive is a tourist drive circling the peak, providing access to the lookout, cafe, gift shop and restaurant. The scenic drive, from the base of Mount Coot-tha to the lookout, is a winding, climbing journey that has views of the greater Brisbane area and of the mountains and coastline that disappear into the horizon.

On a ridge near the summit on the other side of Mount Coot-tha, are the television transmission towers for the Brisbane television stations and their respective studios; Ten (TVQ-10), Nine (QTQ-9), Seven (BTQ-7). The transmission tower for (ABC Brisbane) is located on the mountain, which also broadcasts television for multicultural station SBS. Most of the FM Brisbane radio stations also transmit from Mount Coot-tha.

Part of the Brisbane suburb of The Gap is located on the foothills beneath the television towers. 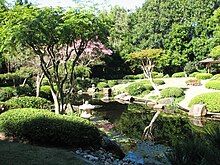 At the base of Mount Coot-tha are the Brisbane Botanic Gardens, which has a tropical plants hothouse and also the Sir Thomas Brisbane Planetarium within its grounds.

There are several popular walking tracks around Mount Coot-tha, one of which includes an art display comprising works produced by local Aboriginal artists. The tracks vary in difficulty, with most involving some uphill sections or steps. Tracks around Mount Coot-tha are often used by hikers training to walk the Kokoda Track in Papua New Guinea as the terrain and climate are considered similar.

View of the cityscape from the
Mount Coot-tha Lookout

The Western side of Mount Coot-tha Forest or Gap Creek Reserve as it is known to the locals is a haven for Brisbane mountain bike riders. The establishment of a world class mountain bike trail network by the Brisbane City Council has created a diverse range of recreational experiences for off-road cyclists.

The mountain bike trails at Mount Coot-tha have been assigned a grading under the International Mountain Bicycling Association, Trail Difficulty Rating System. The multi-use trails in Mount Coot-tha provide the least degree of technical challenge to mountain bike riders, however many of them are steep and loose. Riders are advised to pay special attention when riding over the erosion control banks (water bars) which have been the downfall of many a novice rider. The trail ratings provide a guide to the relative difficulty of each trail.

The multi-use tracks are used by horses, pedestrians and mountain bikers. Each year orienteering events are held in the area.

Mount Coot-tha can be reached by Brisbane Transport Bus 471 (Translink). Between 2014 and 2016 the Brisbane City Council ran a CitySights Bus that included Mount Coot-tha.[23] A short taxi ride from Toowong is also possible as well as Uber and such. Parking is limited at the peak.

Mount Coot-tha has a public library on Mt Coot-tha Road in the Brisbane Botanic Gardens operated by the Brisbane City Council.[24] Unlike most public libraries in Brisbane which have general collections, this library holds a specialist collection about botany and astronomy and related topic reflecting its locations within the botanic garden and the Brisbane Planetarium also on the site.[25]