Moorooka is a southern suburb in the City of Brisbane, Queensland, Australia.[3] In the 2016 census, Moorooka had a population of 10,368 people.[1]

The area was occupied by the Australian Aboriginal Jagera tribe before European settlement. The area was probably a hunting ground with plentiful food and water. There was also reportedly a Bora ring, which older residents of the area recall being shown. The word Moorooka is an indigenous word, either meaning 'iron bark', referring to the numerous iron bark trees in the area, or 'long nose', referring to Mt Toohey at the suburb's periphery.[citation needed]

The suburb was founded as a stop-over for journeys from Brisbane south (Logan and Albert river valleys) and south-west (Ipswich and beyond). A section of the suburb's eastern boundary lies adjacent to Toohey Forest Park.

In April 1884, "Fairmount Estate"[7] made up of 128 allotments was advertised to be auctioned by E. Hooker & Son. The Estate covered an area of Moorooka. The classified advertisement for the auction states for sale were '128 choice allotments, being re-subdivisions of subdivisions 1, 2 and 7 of Portion 158, Parish of Yeerongpilly'. Fairmount Estate was described as having, 'close proximity to the city', timber and permanent water 'close at hand', 'splendid quality' soil for gardening, 'no gullies to till up', a 'railway line passing the Estate, which will in a short time be open for traffic', a 'state school close', and a 'Grocer, Draper, Butcher, Baker, Blacksmith, and others already established in business in the locality of the Estate'.[8]

In March 1889, auctioneer W.J. Hooker sold a suburban subdivision called "Moorooka Park Estate", consisting of 329 allotments bounded by Ipswich Road, Spencer Street (now Gainsborough Street), Logan Road (now Beaudesert Road), Johnson Street (now Dinmore Street) and Keats Street.[9] The subdivision was close to the Moorooka railway station (on the western side of Ipswich Road) and was described as having good soil and elevated sites with "no swamps, no gullies, no broken land".[10]

In May 1889, "Moorooka Railway Station Estate", consisting of 82 allotments was advertised to be auctioned by Arthur Martin & Co. A map advertising the auction states the Estate was bounded by Ipswich Road and Yeronga Road (now Fairfield Road).[11] The classified advertisement for the auction states for sale were '80 choice allotments, being part of Portion 125, Parish Yerongpilly'. "Moorooka Railway Station Estate" was described as 'the position is admirable, being only five miles by rail from the city, where train stops every few minutes in the day', and 'takes in a wide scope of most interesting and charming rural and suburban views'.[12]

In June 1920, "Grand View Estate", consisting of 42 allotments was advertised to be auctioned by Cameron Bros and R.G. Watson. A map advertising the auction states the Estate was 'right at the top of the hill within 7 minutes of the Railway Station.[13] The classified advertisement for the auction states for sale were '40 magnificent allotments' which were described as 'adjoining the residence of Thomas Tonks, Esq.'[14]

In July 1927, auctioneers W. Small & Co sold a suburban subdivision called "Dora Vale Estate", consisting of 83 allotments of 24 to 48 perches on Vale Street, Dora Street, Clyde Street and Sinclair and bounded by Main Street (now Gainsborough Street) to the south and Beaudesert Road to the west. The allotments were described as "high and dry and commanding excellent views" and were convenient to the train, tram and bus services with promises that Ipswich Road and Beaudesert Road would soon be sealed with bitumen.[15] Also in July 1927, Clacher Brothers in conjunction with M.J. Trotter sold the "Hollywood Estate", consisting of 24 allotments on the south side of Forrest Street bounded by Fairy Street to the west and an unnamed proposed street (now Vale Street) to the east.[16][17] In August 1927, the Queensland Development Company sold the "Mayfield Gardens Estate, consisting of 490 allotments (474 residential and 16 commercial) centred around Vendale Avenue and bounded to the west by Beaudesert Road, to the south by Mayfield Road and to the east by Tarragindi Road.[18][19]

St Brendan's Catholic Primary School was established on 28 January 1929 by the Sisters of St Joseph.[21][23]

Between the 1930s and 1969, trams ran along Beaudesert Road, thence along Ipswich Road to the Brisbane CBD.

St Mary the Virgin Anglican Church was dedicated on 6 December 1959 by Archibishop Reginald Halse. Its closure on 5 April 1998 was approved by Assistant Bishop Ron Williams.[26]

The Brisbane City Archives (a collection of local historical records dating back to 1859) was established at Moorooka.[27]

Moorooka has a number of heritage-listed sites, including:

Moorooka has traditionally hosted a working class population stemming from its history as a manufacturing hub during World War II. The southern part of Moorooka bordering Salisbury was the location of government built returned servicemen housing. Recently Moorooka has seen immigrants from various places of the world, including people from the ex-Yugoslavia (Bosnia, Croatia, Serbia), Middle East (Iraq and Iran) and recently people from Africa (Southern Sudan and Eritrea), which has brought an influx of new families into the area.[citation needed]

The suburb is served by Brisbane Transport buses, namely the 110 Inala-City server, 116 Rocklea-Moorvale service, the 117 Acacia Ridge-City Valley Service, the 124 Sunnybank-City service, and the 125 Garden City-City Valley service. There is a zone border crossing at the Beaudesert Road shops, popularly known as Moorvale, for transport zones 1 and 2.[citation needed]

The Moorvale Shopping district hosts office for the Brisbane City Council Councillor for Moorooka Ward Steve Griffiths. The office for the Federal Seat of Moreton is in the nearby suburb of Sunnybank.[citation needed]

Moorooka is serviced by two kindergartens.

Moorooka has two principal churches, the St Brendan's Roman Catholic Church at Hawtree Street and the Church of Christ at Pampas Street and Beaudesert Road. Both feature Sunday services.[citation needed] 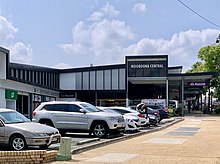 Moorvale is also known for its extensive Woolworths Supermarket, at the northern end of the shopping district, which was opened in 1972 and was the largest Woolworths in Queensland at the time.[citation needed]

On the south end of Moorooka near the AFL club and Moorooka State School located off Beaudesert Road is Pizza Hut, Shear Image Hair & Beauty, now named Harlequin Hair and a petrol station, and within a few blocks either way convenience stores.[citation needed]

Many of the houses are pre-war Queenslanders (on posts, with simple one floor, wooden construction), with small apartment blocks scattered through the suburb. As with many older suburbs of Brisbane, Moorooka is becoming gentrified, with many older homes now being either renovated and extended or replaced by more modern buildings. There are prime real estate areas on the top of hills, with views to the Great Dividing Range over Archerfield in the south, Seventeen Mile Rocks to the west, Mount Coot-tha, St. Lucia, Indooroopilly to the north-west and the city to the north.[citation needed]