Mansfield is a suburb in the City of Brisbane, Queensland, Australia.[3] In the 2016 census, Mansfield had a population of 8,695 people.[1]

Mansfield is situated approximately 13.5 kilometres (8.4 mi) by road south-south-east of the Brisbane CBD.[4]

Part of the eastern boundary of the suburb is marked by the Gateway Motorway.[5]

There is a medium-sized industrial estate situated in the northern part of the suburb, in which an Australia Post mail delivery centre is located.[citation needed]

The suburb has an agricultural past, consisting mainly of dairy cattle and sheep grazing. Original fencelines can still be found in remaining pockets of bushland. There was also light development of industries related to agriculture, such as wool processing and scouring. Also the quarry once located on Ham and Wecker Roads, excavated large amounts of sandstone used throughout some of the historic landmarks of Brisbane, such as the Brisbane City Hall.[citation needed]

Large portions of Mansfield were originally constructed as government housing estates, however these have progressively been replaced by more modern private residences. Due the increasing unavailability and expense of land closer to the CBD, the area is currently experiencing a period of socio-economic growth and renewal.[citation needed]

Christian Outreach College opened in Mansfield on 16 May 1978.[6] However it is now within the suburb of Carindale just over the northern border with Mansfield.[5]

The Mansfield Tavern has served as a venue for many local and touring musical acts. The venue has featured acts as The Offspring, Wickety Wak, Fear Factory, Hunters & Collectors, Madness, Hoodoo Gurus, The Angels and British rock band The Cult.[7] 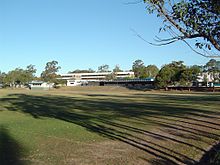 Mansfield has regular bus services to the CBD and to the Westfield Garden City shopping centre at Upper Mount Gravatt.[citation needed]

Arguably the greatest asset of the Mansfield area is its remaining pockets of bushland and parklands. The largest public park in Mansfield, Broadwater Park, is a reasonably large open space with barbecue areas and children's play equipment. Adjoining this parkland is a large bushland reserve which follows the course of Bulimba Creek (a tributary of the Brisbane River).[citation needed]

Mansfield is located in the region of the city which is now colloquially known as the "Bible Belt" due to the large number of people who have settled there to be close to Christian schools and churches.[13]

The suburb recorded a population of approximately 8,700 at the 2016 census.[1] The suburb has a moderate Greek presence with under 2.3% of the population speaking Greek as a first language.[1]