MacGregor is a southern suburb in the City of Brisbane, Queensland, Australia.[3] At the 2016 census MacGregor had a population of 5,844 people.[1]

MacGregor, like its surrounding suburbs, incorporates a very diverse multicultural community. It was previously part of Sunnybank, until the suburb was named in 1967.

The suburb is in three main parts, divided by the six-lane Kessels Road, and separately, Mimosa Creek. Most residential buildings are single and two-storey beige brick houses with a tiled roof.

There appears to be no specific naming convention for the roads. Streets on the eastern part of the suburb include a mixture of plant (Freesia, Galliardia) and Scottish (Blairgowrie, Carnoustie) names. On the south-west portion, Angelina and Damson are plum cultivars, Elberta a type of peach, and Jonathan may refer to a type of apple, being some of the agricultural produce that may have been grown in the area before urbanisation.

Previously part of Sunnybank, the suburb was named by the Queensland Place Names Board on 1 August 1967. The suburb of MacGregor was named after Scottish-born Sir William MacGregor who was the Governor of Queensland from 1909 until 1914.[4] It is spelt MacGregor, but Macgregor is often seen.

MacGregor State High School opened on 28 January 1969 nine teachers and 203 students.[5][6] On 4 November 1973, a tornado struck the school, causing hundred of thousands of dollars' worth of damage and requiring the rebuilding of much of the school.[7][8] 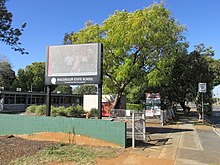 Griffith University and the Queensland Sport and Athletics Centre are in the adjoining suburb of Nathan.

Additional to the schools, there is a Robertson Scout Group, a large recreational area of the D. M. Henderson Park, and the MacGregor Netball Association playing fields. The park was named after local resident Daniel Murray Henderson (c. 1871 – 3 July 1954), who was a strawberry and small crops farmer.[15][16] Henderson lived on Mains Road, near the intersection with Fleetwood Street, MacGregor.

Public transport in the area to Brisbane City is by bus at the MacGregor park-and-ride, or the nearby Garden City Interchange or Eight Mile Plains busway station. The nearest Queensland Rail suburban railway stations are Altandi, Sunnybank, Banoon or Coopers Plains.

Either side of Kessels Road are large business retail outlet premises as well as a driver licence testing centre.

Mimosa Creek, a tributary to the Bulimba Creek is part of a nature reserve network including the nearby Toohey Forest Conservation Park.

The median age of the MacGregor population was 32 years of age, 5 years below the Australian median.