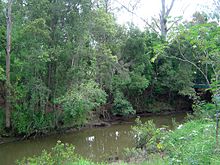 Kenmore is a suburb of the City of Brisbane, Queensland, Australia.[3] It is on the Brisbane River 10 kilometres (6.2 mi) south-west of the Brisbane CBD. Kenmore is a leafy suburb with a high number of professional residents and families. It is dominated by detached housing, but townhouses and units are increasing within the suburb. Kenmore has benefited greatly from the Centenary Highway which gives it direct access to the city via Milton Road, Coronation Drive, or since 2015 the Legacy Way (toll road).

There are a number of schools in the suburb, including Kenmore State School, Kenmore South State School,[4] Kenmore State High School and private Christian schools.[5] There are many restaurants as well as two large retail centres, Kenmore Village and Kenmore Plaza, located on Moggill Road.

Kenmore is characterised by rolling hills and greenery.

The median age of the Kenmore population was 39 years of age, 2 years above the Australian median.

Shire of Moggill War Memorial, at the intersection of Moggill Road and Brookfield Road, Kenmore 1925

European settlement began in the 1840s and was part of a sheep and cattle run which extended from Milton to Mt Crosby. In the 1850s land was released to new settlers from Britain in 15 to 20 acre lots. During the 1850s and 1860s areas around Kenmore and Brookfield provided Brisbane with timber and there were also small farms producing a variety of crops.[6]

Around 1880 Andrew Todd purchased 100 acres in the centre of what is called Kenmore today. In the early 1900s dairy farming began to be a major farming activity. In 1910 Chinese market gardeners moved in and grew vegetables.[6]

A war memorial was commissioned by the residents of the Shire of Moggill commissioned a war memorial which was unveiled on 3 July 1920 by General Spencer Browne and Edward Macartney, the Member of the Queensland Legislative Assembly for Toowong.[7]

In the early 1950s Hooker's bought dairy farming land around Dumbarton Drive and this began the modern development of Kenmore. In 1960 roads were upgraded. In the 1960s earth works for the village shopping centre began. In 1972 the ambulance centre opened, in 1975 the fire station opened and in 1978 the police station opened.[6]

Kenmore was one of many Brisbane suburbs partially affected by the 2010–11 Queensland floods.

Kenmore Library opened in 2010 as part of an extension of the Kenmore Village shopping centre.[10]

The Brisbane City Council operates a public library at the Kenmore Village Shopping Centre on the corner Moggill Road and Brookfield Road.[11]

Kenmore has numerous parks[12] and playing fields. It has easy access to outdoors activities in surrounding suburbs, including walking tracks and roads to Mt Coot-tha lookout, Brisbane Botanic Gardens and the planetarium; boating ramps into the Brisbane River and horse riding facilities in Fig Tree Pocket and Brookfield.

It has a variety of sporting venues that are available for use. The largest and easiest to access is Akuna Oval, which has areas for soccer, AFL and rugby, as well as extensive walking tracks throughout the area. Other venues that can be rented are the Kenmore Primary School[13] tennis courts and some facilities at Kenmore South Primary School.[4] Community classes are often held at various areas around Kenmore during term-time and these classes range from yoga to fencing to pilates. There is also a women-only gym, Curves International, on Brookfield Road and a Jett's Gym, on Marshall Lane.

Kenmore is dissected by Moggill Creek. The Moggill Creek Catchment Group organises working bees to rid the creek area of rubbish and introduced plant species, which are not suited to the area.[15]

The Rotary Club of Kenmore is non-political, non-denominational and open to all cultures, races and creeds.

Kenmore is well connected to the city and the University of Queensland by road and bus.

A motorway extension known as the Kenmore Bypass has been proposed, to alleviate congestion along Moggill Road during peak commuting hours, but has met widespread opposition from local residents because of the inevitable resumption of residential properties, loss of amenity and disruption associated with building a major new road through an established residential area.[17][18][19]

There is no rail station in Kenmore. Indooroopilly is the closest station. In the 1890s the Queensland Parliament approved the construction of a rail line from Indooroopilly to Brookfield, running through the southern side of Kenmore following the valley of Cubberla Creek and thence roughly parallel to the present alignment of Kersley Road. However the line was never constructed.[20]