Kelvin Grove is an inner northern suburb in the City of Brisbane, Queensland, Australia.[3] In the 2016 census, Kelvin Grove had a population of 7,927 people with a median age of 27.[1]

Kelvin Grove is a suburb in the City of Brisbane, Queensland, Australia.[3] In the 2016 census, Kelvin Grove had a population of 7,927 people.[1]

Kelvin Grove is approximately 3 kilometres (1.9 mi) from the CBD. This hilly suburb takes its name from Kelvingrove Park in Glasgow, Scotland.

It is primarily residential with tree-lined streets and some commercial and light industrial activities along its main thoroughfare, Kelvin Grove Road. La Boite Theatre Company, Queensland's second largest theatre company, operates from the Roundhouse Theatre on the Kelvin Grove campus of the Queensland University of Technology.

In common with many inner suburbs of Brisbane, the suburb has a mixture of traditional "Queenslander" homes, some post-war worker's cottages and more modern apartment blocks. 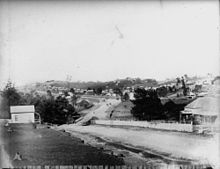 Dr Joseph Bancroft built a residence in the area in 1865 which he called Kelvin Grove after a park in Glasgow that he remembered fondly. This is the origin of the suburb's name.[4]

Kelvin Grove was part of the Shire of Ithaca (later the Town of Ithaca) before the town was amalgamated into the City of Greater Brisbane in 1925.

In 1901 electric trams commenced operations along Kelvin Grove Road, running to the city. The tram service ceased in December 1968 and since that time diesel and more recently compressed natural gas buses operated by the Brisbane City Council have served the suburb. Electric trolley-buses, also operated by the Brisbane City Council connected the suburb with Fortitude Valley, via Herston between 1953 and 1969.

In August 1914, 46 subdivided allotments of "Bancroft Park Estate" were advertised to be auctioned by Isles Love & Co. A map advertising the auction states the estate was fronting the Kelvin Grove tram line and easy walking distance of town.[6] This property was situated at the Three Mile Bridge, on the Kelvin Grove tram line and waswell known as the former residence of the late Dr Bancroft.[7]

Kelvin Grove has a number of heritage-listed sites, including:

The median age of the Kelvin Grove population was 27 years of age, 10 years below the Australian median.

The suburb is also home to the Kelvin Grove Campus of the Queensland University of Technology.