Kalinga is a suburb of Brisbane in the City of Brisbane, Queensland, Australia.[1]

Kalinga is predominantly flat, with a mix of small apartment blocks and houses, with some older style Queenslanders still extant. The area borders with Kalinga Park. This area is notable for the original residence of Alfred Lutwyche, known as Kedron Lodge. 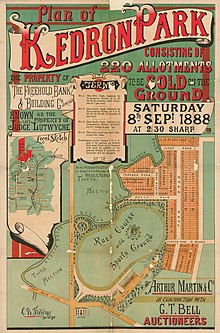 The name Kalinga derives from Aboriginal word Ngalinnga ("ngalin-nga"), probably from the Yuggera language, Turrbal dialect, meaning belonging to us.

Between 1927 and 1962 an electric tram service operated by the Brisbane City Council served the suburb, branching off the Chermside line at Kedron Park Road.

The name Kalinga had been in use for the area for many years as a neighbourhood within the suburb of Wooloowin, but it was not until 16 October 2015 that Kalinga was officially gazetted as a suburb, having been excised from Wooloowin following requests from local residents.[1][2][3]

Kalinga has a number of heritage-listed sites, including: