Jindalee is a south-western residential suburb in the City of Brisbane, Queensland, Australia.[3] In the 2016 census, Jindalee had a population of 5,320 people.[1]

Jindalee is 15.2 km (9 mi) by road south-west of the Brisbane CBD, and is a part of the Centenary suburbs. It is bordered by the Brisbane River to the north.

Wolston Estate was the property of M. B. Goggs, whose father obtained the land forty years previously in the 1860s and after whom Goggs Road is named.[6]

A small portion of Jindalee comes from the Wolston Estate, consisting of fifty-four farms on an area of three thousand acres, offered for auction at Centennial Hall, Brisbane, on 16 October 1901.[7] Only three of the farms sold at the original auction.[8]

In 1903 the Sherwood Division became the Shire of Sherwood .

In 1925, the Shire of Sherwood was amalgamated into the City of Brisbane.[9]

The Aboriginal meaning for Jindalee is "bare hills". Jindalee was the first of a series of suburbs originally called the "Centenary" suburbs, as planning for them commenced in 1959, the year of Queensland's centenary.

Prior to development, the area had been largely used for grazing and dairy farming; however, it was developed as part of the Hooker Centenary Project, beginning in 1960.[10] The 8th Australian Scout Jamboree was held in the southwestern corner of Jindalee, which was subdivided and became Jamboree Heights, a suburb in its own right.[citation needed]

The 1974 floods caused extensive damage to Jindalee, including inundation of many houses, as well as severe damage to the Centenary Bridge. A gravel barge rammed into the upstream side, blocking the floodwaters and raising real fears that the bridge would collapse. The barge was partly sunk using explosives to reduce pressure on the bridge. When the floodwater receded, the barge was refloated and beached downstream to be cut up for scrap. The damage sustained by the bridge required its partial closure for repairs. For two years after the floods, the bridge was reduced to a single lane. The bridge was duplicated in 1980, providing two lanes each way.[citation needed] 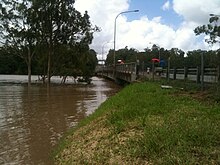 Brisbane River in flood at Jindalee at the Centenary Bridge, 2011

Jindalee is accessible via the Centenary Highway. Some bus routes service the suburb, namely: