Indooroopilly /ˌɪndrəˈpɪli/ is a western suburb in the City of Brisbane, Queensland, Australia.[3] In the 2016 census, Indooroopilly had a population of 12,242 people.[1]

Indooroopilly is bounded to the south and south-east by the Brisbane River. Indooroopilly is connected to Chelmer on the southern bank of the river by four bridges, consisting (from east to west) of a pedestrian/cycling bridge (Jack Pesch Bridge), two rail bridges (Albert Bridge and Indooroopilly Railway Bridge), and one road bridge (Walter Taylor Bridge).[4]

The suburb is designated as a regional activity centre.[5]

Indooroopilly boasts significant commercial, office and retail sectors and is home to Indooroopilly Shopping Centre, the largest shopping centre in Brisbane’s western suburbs. The suburb is popular with professionals and a large number of university students from the nearby University of Queensland campus in St Lucia. The housing stock consists of a mix of detached houses and medium density apartments. There has been a trend towards increasing small lot and townhouse development in the suburb in recent years.[citation needed] Nevertheless, many post-war homes and iconic Queenslanders have also been restored. Brisbane City Council regulations to preserve the 'pre-war' look of Brisbane discourage destruction of many of Brisbane's Queenslanders and buildings. It is one of the Brisbane City Council's proposed Major Centres. 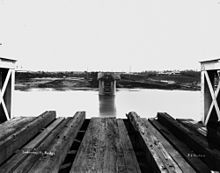 The traditional owners of the Indooroopilly area are the Aboriginal Jagera and Turrbal groups. Both groups had related languages and are classified as belonging to the Yaggera language group. 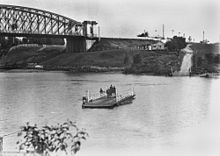 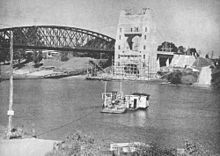 The area was first settled by Europeans in the 1860s and agriculture and dairying were common in the early years.

The arrival of rail in 1875 and completion of the Albert rail bridge across the Brisbane River to open the Ipswich rail line the following year spurred the development of Indooroopilly.

On 3 June 1878 auctioneer John Cameron offered 54 suburban allotments in the Henderson Estate which was bounded by Lambert Road to the north, Clarence Road to the west and the Brisbane River to the south. The lots were mostly 32 perches (810 m2) except for the riverside lots which were larger.[11][12] The sale was not completely successful as a further auction of the same estate was held on 6 December 1879 and again on 27 July 1880.[13][14]

The 1893 Brisbane flood destroyed the original Albert Bridge, and its replacement was opened in 1895.

On 7 August 1909 auctioneer G.H. Blocksidge offered 60 suburban allotments, all 16 perches (400 m2), in the Waverley Estate, which was bounded by Stanley Street to the west, Waverley Road to the north and Adelaide Street (now Woolley Street) and Nelson Street to the east.[15][16]

A lead-silver mine was established on an Indooroopilly property in 1919 and extraction continued until 1929 when the mine became unprofitable. Today the University of Queensland operates the site as an experimental mine and teaching facility for engineering students (the Julius Kruttschnitt Mineral Research Centre).

On Sunday 14 March 1926 Monsignor James Byrne laid the foundation stone of the Church of the Holy Family.[17] On Sunday 4 July 1926 Monsignor Byrne opened and dedicated the new building to be used as both a church and a school. The church of the Holy Family is a wooden structure of 60 by 25 feet (18.3 by 7.6 m) with two 10 feet (3.0 m) verandahs. The architects were Messrs Hall and Prentice, and the contractor Mr R Robinson. The cost of the building was £2500 and the land something exceeding £4000. Against this a donation of £1000 had been received while at the foundation stone ceremony £500 was received and the donations at the opening were £400.[18] However, it was not until late 1927 that five Brigidine Sisters relocated from Randwick in Sydney to Indooroopilly to occupy the house Warranoke (built in 1888-1889 for Gilson Foxton and designed by architects Oakden, Addison and Kemp).[19] The Sisters opened Holy Family Primary School in the church-school building on 19 February 1928.[10][20] The Sisters opened Brigidine College in Warranoke in 1929.[21]

The landmark Walter Taylor Bridge across the Brisbane River was completed in 1936.

In 1936 Roman Catholic Archbishop James Duhig granted 25 acres (10 ha) of river front land on the Chelmer Reach of the Brisbane River to the Christian Brothers to establish a junior preparatory school for St Joseph's College at Nudgee to relieve the pressure on the boarding school at Nudgee.[22] St Joseph's Nudgee Junior College opened and blessed by Duhig on 10 July 1938. The first principal was Brother J.M. Wynne. In the first year of operation there 46 boarders and 6 day pupils.[10][23]

Indooroopilly was the location for Australia's principal interrogation centre during World War II. The three interrogation cells at Witton Barracks are the only cells remaining in the country.[24]

The first stage of Indooroopilly Shoppingtown opened in 1970.

In 1995 the boarding school at St Joseph's Nudgee Junior College was closed and the boarders transferred to the main school at Nudgee. The school had approximately 300 day students in that year.[23]

In 2014 St Joseph's Nudgee Junior College closed as the Queensland Government decision to move Year 7 from primary school to secondary school would have left the school struggling to survive with the smaller number of students, so the decision was taken to close the primary school feeding into the Nudgee secondary school and replace it with a new Catholic primary and secondary school. In 2015 a new Catholic school Ambrose Treacy College (named in honour of Ambrose Treacy) opened on the site, operating n the Edmund Rice tradition, with many students transferring from the old to the new school.[23][27]

Indooroopilly has a number of heritage-listed sites, including:

Moggill Road is the main thoroughfare, connecting Indooroopilly to Toowong and the city via Coronation Drive (inbound), and Chapel Hill and Kenmore (outbound). The Western Freeway also serves the suburb. Indooroopilly is well connected by public transport. There is a bus interchange adjoining the Indooroopilly Shopping Centre, where Brisbane Transport operates services to the CBD, university and other western suburbs. Indooroopilly railway station provides frequent services to the Brisbane CBD, Ipswich, Richlands and Caboolture.