Hemmant is 11 kilometres (6.8 mi) by road east of the Brisbane CBD.

Hemmant is bounded by the Brisbane River to the north and Bulimba Creek to the west.[5] 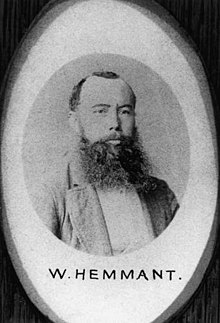 The suburb of Hemmant was named after William Hemmant.

In 1858 the land of Hemmant area was sold for fruit, vegetable growing and farming in general. Early 1860s sugar cane was farmed and mills were built to process the cane. Gibsons Clydesdale mill was well known as was a co-operative mill at Murarrie in 1872.

Part of Hemmant was originally known as "Doughboy Creek" The whole district had been named after William Hemmant a local parliamentarian in 1876. He was treasurer in the Macalister government and between 1873 and 1876 represented the Bulimba electorate.[10][4]

In 1988 an old quarry site became the Hemmant Quarry Reserve, next to the Hemmant Cemetery (which, despite their names, are now within the boundaries of Tingalpa not Hemmant).[14]

The median age of the Hemmant population was 34 years of age, 3 years below the Australian median. 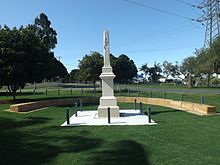 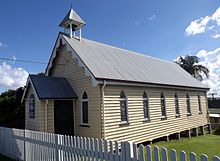 Hemmant has a number of heritage-listed sites, including:

The Hemmant Quarry Reserve (immediately adjacent in Tingalpa) is 24 hectares (59 acres) and has walking tracks and picnic facilities.[14]