Hawthorne is suburb of the City of Brisbane, Queensland, Australia.[4] In the 2016 census, Hawthorne had a population of 4,989 people.[1]

There are two theories about the name of the suburb. One is that butcher William Baynes purchased land in the area in 1875 and named the area after Hawthorn in Melbourne where he lived before his arrival in Queensland in 1859.[4] An alternative theory is that Baynes planted many hawthorne bushes in the 1850s and 1860s.[5]

Hawthorne started as a farming district in the 1860s, and was gradually subdivided as Brisbane grew. This was helped by the introduction of ferry and tram services.

In October 1885 the "Galloway's Hill Estate" was advertised to be auctioned by Arthur Martin & Co.[6] A map shows the blocks, including river front land, in Wendell Street, Waldo Street, and adjoining land in Hawthorne Road.[7]

The "Oak Park Estate", made up of blocks on Orchard Street, Park Street and Oak Street, was first advertised for sale in September 1885.[8] A map advertising 33 allotments in the estate to be auctioned on 13 August 1887 shows the auctioneer was G.T. Bell & Co.[9] Due to inclement weather that sale was postponed to 20 August 1887.[10]

The "Bulimba Road Estate", made up of 200 blocks near the Hawthorne Estate, was advertised for sale in June 1887.[11][12] A map advertising the estate shows the blocks near Bulimba Road (now Hawthorne Road) for auction by Arthur Martin & Co.[13]

The "Bulimba Park Estate", comprising 78 allotments in the area that is now Mullens Street, Barton Road and adjoining lots on Hawthorne Road and Riding Road, was advertised for sale in November 1887.[14] A map of the estate notes the seller of the land as the Metropolitan Freehold Land & Building Company Limited, and the auctioneer as G.T. Bell.[15]

In November 1888 the "Circular Quay Estate", made up of 40 allotments, including six riverfront blocks, within five minutes' walk to the Bulimba steam ferry, was advertised to be auctioned by John Macnamara & Co.[16] A map shows the lots in the area of land currently bordered by Leura Avenue.[17]

Lourdes Hill College was established in February 1916 by the Sisters of the Good Samaritan.[18] It was officially dedicated on Sunday 7 May 1916 by Roman Catholic Archbishop of Brisbane, James Duhig.[19]

In September 1935 "Barton Lodge Estate" , comprising six blocks on Barton Road and Gordon Street, were advertised to be auctioned by Cameron Bros.[20] A map advertising the auction shows three of the blocks with river frontage and all within walking distance of the Hawthorne ferry and the Balmoral tram terminus.[21]

The Hawthorne Cinema complex, on Hawthorne Road, is a classic theatre, opened in the 1940s it contains a large curved screen - one of the largest in Brisbane, as well as 2 smaller screens. It is part of the Cineplex Australia chain of cinemas, also including the Balmoral, Southbank and the (newly opened) Victoria Point cinema complexes. Hawthorne is home to several parks, and has numerous public transport options and a CityCat stop. Lourdes Hill College is an independent girls college in the heart of Hawthorne, that opened in 1916. 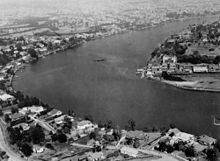 Aerial view of Hawthorne taken in 1947

Hawthorne has a number of heritage-listed sites, including:

Hawthorne is located under 2 km (1.2 mi) away from Morningside railway station, which provides Queensland Rail City network services to the Brisbane CBD and Cleveland.

Hawthorne is serviced by two bus routes, the 230 and the 232. Each bus route provides access to the Brisbane CBD, Fortitude Valley as well as other suburbs listed below.

The Hawthorne ferry wharf provides CityCat services to Brisbane CBD, South Bank Parklands, and other suburbs on the CityCat network.