The Gympie Region is a local government area in the Wide Bay–Burnett region of Queensland, Australia, about 170 kilometres (110 mi) north of Brisbane, the state capital. It is between the Sunshine Coast and Hervey Bay and centred on the town of Gympie. It was created in 2008 from a merger of the Shires of Cooloola and Kilkivan and part of the Shire of Tiaro.

The Regional Council, which governs the Region, has an estimated operating budget of A$50 million.

Prior to the 2008 amalgamation, the Gympie Region existed as four distinct local government areas: 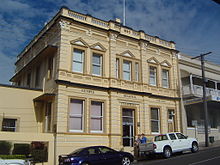 The Gympie area was originally settled for grazing purposes. The discovery of gold in 1867 led to a gold rush and the development of the Mary River valley for closer agricultural pursuits.

The Widgee Divisional Board was incorporated on 11 November 1879 under the Divisional Boards Act 1879. On 3 July 1886, its western part separately incorporated as the Division of Kilkivan. With the passage of the Local Authorities Act 1902, both Widgee and Kilkivan became shires on 31 March 1903. On 21 November 1940, the Widgee Shire Council moved into new premises formerly occupied by the Bank of New South Wales at 242 Mary Street, Gympie.

The council remains undivided and its elected body consists of eight councillors and a mayor, elected for a four-year term.