This is a list of freeways (or motorways/expressways) in Australia, sorted by states and territories and their corresponding routes. This list includes tollways / toll roads such as the CityLink freeway system in Melbourne. This list has over 70 entries. The only jurisdiction in Australia without freeways is the Northern Territory. Victoria has the largest and densest freeway network in Australia.

New South Wales has the second largest number and second highest density of motorways in Australia, with the majority being located in Sydney City or the metropolitan areas. 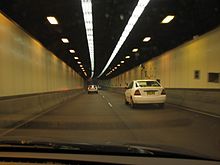 Unlike some other states, South Australia only uses the 'M' designation on grade separated freeways

The Brooker Highway at Claremont

While the overall quality of Tasmania's highway network has been constructed to a high standard, its grade separated freeway network is limited. In the past, Hobart and Launceston have each had comprehensive transport studies conducted, proposing grade separated freeways running through and around them. While some of these roads have been constructed, the majority are limited access featuring at-grade intersections. Devonport and Burnie are the only major population centres with freeway standard roads linking each other. There has been repeated proposals in recent years to fully upgrade the Midland Highway to grade separated freeway standards.[1][2]
This List is limited to Tasmania's freeway-standard roads.

Victoria has the largest number and highest density of freeways in Australia, with the majority being located in Melbourne City or the metropolitan areas.

The reason behind Victoria having a high density of arterial roads, highways and freeways, is due to most of Australia having a low population density over a large area, where towns are sparse or located a significant distance from each other; but with Victoria having towns located throughout the entire state, with large numbers of inhabitants, in both urban and rural areas (many of which are major) such as Ballarat or Bendigo. 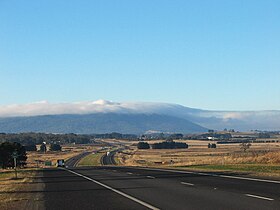 Note: 'East' and 'West' sections are officially part of the same freeway and route corridor.

Western Australia has three freeways – Kwinana Freeway, Mitchell Freeway, and Graham Farmer Freeway – as well as sections of several highways which are subject to control of access[4][5] and only have grade-separated intersections.[6]:3 Such highways may be described as freeway-standard[6][7][8] or expressway-standard.[9][10]