Forest Lake is an outer south-western suburb of the City of Brisbane, Queensland, Australia.[2] In the 2016 census, Forest Lake had a population of 22,904 people.[1]

It was the first Master Planned Community within the City of Brisbane.

Forest Lake was considered instrumental in the creation of affordable housing within Australia. The development was the first modern-day community to contain small lot product, a first during its time. The master-planned community contained retail, commercial, educational, residential, retirement, and recreational uses. The entire community is linked by an extensive network of pedestrian and cycle paths, which are integrated into the large open-spaced network.

Forest Lake lies within the Brisbane City Council municipality and is approximately 24.59 kilometres (15.28 mi) from the Brisbane central business district. It adjoins the suburbs of Doolandella, Inala, Richlands and Heathwood. It successfully mixes wildlife with residential development.

The centrepiece of Forest Lake is an $8.9 million, 10.9 hectare man-made recreational lake, with a perimeter of 2.7 kilometres (1.7 mi). $1.8 million was spent on the dam wall, outlet structure and boulevard embankment. It has an average depth of 2.6 with a 300 to 600 mm around the safety ledge, deepening to 4 metres in the centre. The volume of the lake is 310,000 cubic metres or 269 Olympic sized swimming pools. Surrounding the lake is 3.5 kilometres of pedestrian and cycleways and 8 hectares of adjacent parkland. It was completed and opened in 1994.[3]

Forest Lake is situated in the Yugarabul traditional Aboriginal country.[4]

During World War II, there was a command post of the Darra Ordnance Ammunition Depot in the area now Forest Lake. This depot was the largest ordnance depot in the South West Pacific Area. On 31 August 2005 the Richlands-Inala History Group erected an honour stone in Homestead Park, the site of the command post, commemorating the ammunition depot and the American army camps in Inala and Wacol nearby.[5] In 1990, construction of the master planned community commenced by Delfin Lend Lease. In 1991, Forest Lake was officially launched by the then Premier of Queensland, Wayne Goss.[3] The development lasted until 2006, when the last block of land was sold.

The master planned community which was created by Delfin Lend Lease was so successful, that in the latter years of the development, up to 40% of new homes sold were purchased by existing residents. (David Keir, Project Director 1996-2000).

Forest Lake had a population of 20,900 residents, as of February 2006.[citation needed]

In 2011, the lake experienced a blue-green algae (cyanobacterial) bloom, causing some concern to local residents. A local councillor advised people to not enter the water due to the high toxicity levels from the algae bloom.[7] The algae bloom occurred again in 2017.[citation needed]

Forest Lake is serviced by a weekly visit of the Brisbane City Council's mobile library service at the Forest Lake Shopping Centre.[17] 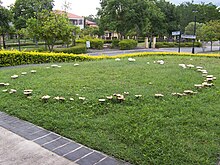 According to the 2016 census, Forest Lake includes the largest Sri Lankan Australian community of any suburb in Queensland, numbering 344 individuals and making up 1.5% of the suburb's population.[24]