Fig Tree Pocket is a leafy riverside western suburb of the City of Brisbane, Queensland, Australia. The suburb is located on a river pocket along the north side of Brisbane River and it is 8 kilometres (5.0 mi) west of the Brisbane CBD.[3] Fig Tree Pocket is home to one of Brisbane's oldest and most loved attractions, Lone Pine Koala Sanctuary, which was established in 1927. The suburb is devoted mostly to low density housing with a large proportion of parks and low levels of noise pollution. At the 2016 Australian Census, the suburb recorded a population of approximately 4,000.[1]

Fig Tree Pocket is an affluent suburb that has some of the most expensive and exclusive riverfront properties in Queensland and Australia. In early 2009, one luxury property sold for A$9.5 million[4] and another sold for A$7.15 million.[5] Following the 2010–11 Queensland floods, a riverfront estate sold for $8.25 million at Ningana Street in May 2014 which set a record for the highest price achieved after the natural disaster.[6] 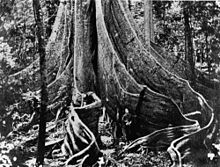 The suburb takes its name from the Moreton Bay fig trees (Ficus macrophylla). In 1866, one particular fig tree in the area was photographed and described as able to shelter 400 people.[7] In 1866, a reserve of 1.6 hectares (4.0 acres) was created around the fig tree.[3][8] The tree no longer exists but the circumstances of its disappearance are not known.[9]

It is noteworthy also for the absence of stores of any kind, with the nearest major shopping complex being the Indooroopilly Shopping Centre. Despite this removal from other standard suburban conveniences, the area is serviced by two Brisbane Transport bus routes – the 430 and the 445 – both of which have a terminus at Mandalay Park. The western boundary is marked by the Western Freeway.

Fig Tree Pocket has a premier equestrian club and the Fig Tree Pocket boat ramp is a popular point on the Brisbane River for water skiers to launch from.

The suburb was one of many in Brisbane which were affected during the 2010–11 Queensland floods.

In the 2016 Australian census, the population of Fig Tree Pocket was 4,045, 49.9% female and 50.1% male. The median age of the Fig Tree Pocket population was 40 years of age, three years above the Australian median. 66.8% of people living in Fig Tree Pocket were born in Australia, which is very close to the national average of 66.7%. The other top responses for country of birth were England 6.2%, South Africa 4.0%, New Zealand 3.0%, United States of America 1.3%, and India 1.3%. 84.3% of people speak only English at home; the next most popular languages were Mandarin 1.7%, German 0.9%, Afrikaans 0.8%, Spanish 0.7%, and Hindi 0.7%. 47.5% of people aged 15 years and over in Fig Tree Pocket had completed a bachelor's degree or higher, which is significantly more than the national 22.0%. "No Religion" was the top response for religious affiliation, with 31.5% of the population. Catholic and Anglican were the next highest religious affiliations with 22.2% and 15.6% respectively.[1]