Enoggera is a suburb of the City of Brisbane, in Queensland, Australia.

Enoggera is 6 kilometres (3.7 mi) north-west of the Brisbane CBD.[3] The west of the suburb is dominated by Enoggera Hill.

The word Enoggera is a wrongly spelled by an error made at the Government Lands Office, when the letter u was mistaken for n. It was intended that the name should be recorded as Euogerra, a contraction of the Turrbal phrase youara-ngarea meaning literally "sing-play" or song and dance. It refers to a ceremonial site used for dancing.[3] It is said to have first applied to a site near the mouth of Breakfast Creek. It is possible, however, that the name was independently applied to a site at the place at presently known as Enoggera.[4] They named the area near Bancroft Park "Bu-yu-ba", which means, "straight shin bone", referring to a straight stretch of creek.[5][6] Enoggera is a corruption of Yowogerra, which in Turrbal means corroboree. Because this area was given a distinct name indicates that it held a significant place in Turbull culture as a camping and corroboree region.[6]

In 1845, John Brennan purchased six hectares of land in Enoggera. Six years later, Thomas Hayes moved to the area and bought thirty-three acres of land. Enoggera initially developed as a farming community with orchards and vineyards.

In the 1860s, the track to the Gympie goldfields passed through Enoggera, and this assisted with development. As the population increased, the first school opened in 1871, and the railway line to Enoggera Station opened in 1899.

In 1887, the local government Division of Enoggera was proclaimed, bound to north and south by Kedron Brook and Enoggera Creek, and stretching from Alderley to The Gap and beyond the Enoggera Dam. Enoggera became a shire in 1903 before being amalgamated into the City of Brisbane.

In 1890, an advertisement was published to auction the Blackheath Estate, being re-subdivisions of part of portion 190, County of Stanley, Parish of Enoggera, by E. Hooker & Son Auctioneers.[7]

The land for the Enoggera Army Barracks was acquired in 1910, and opened in the same year. The barracks is still operation but now known as Gallipoli Barracks.

On Saturday 15 May 1915 there was a stump capping ceremony for a new Presbyterian church at Enoggera.[10] The location was on the corner of Pickering Street and Station Avenue (27°25′07″S 152°59′09″E﻿ / ﻿27.4185°S 152.9859°E﻿ / -27.4185; 152.9859﻿ (Gaythorne Presbyterian Church)), now within Gaythorne. In 1926 the church was extended to create a Sunday school.[11] As part of the merger of many of the Methodist, Presbyterian and Congregational churches into the Uniting Church of Australia in 1977, the church became Gaythorne Uniting Church. However, falling congregation numbers led to a consolidation of Uniting churches in the area, leading to the closure of the former Presbyerian church. Since 2012, it has been used as an early education centre.[12]

In May 1919, subdivided allotments of Rangeview Estate Enoggera were auctioned by Cameron Bros.[13] This area is now within the suburb of Gaythorne. The map advertising the auction states that the Estate was within 5 minutes' walk away from the Rifle Range Railway Station, now known as Gaythorne Station.[14][15] In April 1921, the land unsold in the previous auction was re-auctioned as "Gaythorne & Rangeview Estates" made up of 53 allotments were advertised to be auctioned by Cameron Bros.[16][17]

In July 1920, subdivided allotments of Elswick Estate Enoggera were auctioned by Isles, Love, and Co.[18] The map advertising the auction depicts the estate’s proximity to the Enoggera Railway Station, and describes the land as having “beautiful grassy park-link ridges” and “lovely foliage trees”.[19] The map further states that a water main passes through the estate and that there would be a good prospect of trams and electric light extension.

In 1925. Derby Estate, which was once owned by Tim Corbett, was bordered by Laurel Street, Elkhorn Street, Derby Lane, and Clover Street.[20][21]

In 1949, the tram line from Newmarket was extended along Samford Road to Enoggera. The tram line closed on 2 December 1968. 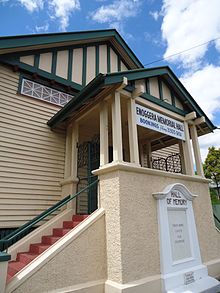 Enoggera has a number of heritage-listed sites, including:

The median age of the Enoggera population was 30 years of age, 8 years below the Australian median.

78.9% of people were born in Australia compared with the national average of 66.7%. The next most common countries of birth were England 2.8% and New Zealand 2.7%. 87.0% of people spoke only English at home.

Enoggera is home to a number of educational institutions, including Hillbrook Anglican School, Our Lady of The Assumption and Enoggera State School.

Via bus, Enoggera is serviced by Brisbane Transport buses, predominantly from the bus-rail interchange at Enoggera Railway Station and at Wardell Street, which travel to the Brisbane CBD, Chermside, Ashgrove and Indooroopilly.