Dominant natural features of the area include Bulimba Creek. Before white settlement the area was home to a diverse range of plants and animals. There are also areas of remnant bushland in the suburb and a small number of market gardens.

The Brisbane Technology Park is an initiative of the Queensland Government developed to provide a catalytic environment for established and emerging knowledge-intensive, technology-based companies.

The name of the Aboriginal clan formerly occupying this area is uncertain. According to one source they are likely to have been the Chepara clan of Eight Mile Plains who spoke Turrbal. The Yerongpan of Oxley Creek who are said to have claimed the area from Brisbane to Ipswich. Another source claims they were the Yagarabal, who ranged from Brisbane to the Logan River and west to Moggill Creek. The Aborigines used a trail which later became Logan Road. This trail bisected many creeks including the Mimosa Creek and Bulimba Creek watercourse.[5]

The name Eight Mile Plains was given early in its settlement, and refers to the area's flat topography and the distance (8 miles (13 km)) to One Mile Swamp (now Woolloongabba).[6][7]

In 1861, over 7,800 acres (32 km2) in the nearby Coopers Plains area had been proclaimed the Brisbane Agricultural Reserve. In 1864 this was extended by a further 5,500 acres (22 km2) and the Eight Mile Plains Agricultural Reserve was formed. It comprised the current suburbs of Sunnybank, Sunnybank Hills, Runcorn, Kuraby, Eight Mile Plains and parts of Coopers Plains, Algester and Stretton.[5]

Charles Baker bought land in the area in 1863. He obtained a publican's licence for Baker's Hotel on 12 December 1865.[8] Joseph Baker takes over the licence in 1869 and changes the name to Eight Mile Plains Hotel.[9][10] In 1875 the hotel became a Cobb & Co staging post.[11] In 1927, two Scottish sisters Mary-Jane McCamey and Emma O’Sullivan took over the hotel and changed its name to “The Glen”, because the undulating countryside reminded them of the area in Scotland where they were born. The O'Sullivan family introduced wood chopping competitions at the hotel, including a cross saw event with one end being taken by a woman (known today as a Jack and Jill competition). These events attracted huge crowds and led to the formation of the Queensland Axeman's Association which continues to operate wood chopping competitions throughout Queensland and send teams to national and international events.[12] As at 2019, The Glen Hotel contains to trade making it one of the longest continuously trading hotels in Queensland.[11]

The Eight Mile Plains Provisional School opened on 7 June 1869 in Charles Baker's paddock on Logan Road between Levington Road and the Glen Hotel. The school building was erected by Baker at his own expense. There were approximately 15 students at that time.[13][14][15][16] However, the school was poorly located on the outskirts of the area and the building was in poor condition and by 1875 there was local agitation for a new building to house the 80 students in a more central location.[17][18] In June 1880 tenders were called to erect a new school building made of hardwood.[19] In 1896 it became Eight Mile Plains State School.[20]

In September 1883, 231 allotments of "Logan Railway Estate" were advertised to be auctioned by John Cameron.[21] A map advertising the auction illustrates the proximity of the estate to the Logan Railway Line.[22]

Between 1902 and 1904 the Anglican, Catholic, Lutheran and Methodist communities in the area decided to construct a church on Millers Road that would be shared between them with each denomination holding their services in the church according to a roster until such time as each denomination established its own church. This arrangement continued until it was only the Anglican faith still using the building, when it then became St Paul’s Anglican Church.[23]

Electricity was extended to the district in 1936.[5]

St Johns Lutheran Church was officially dedicated on Sunday 9 December 1951 by Pastor M. Lohe, president of the Lutheran Church in Queensland. The brick church was built entirely by the volunteer labour of 30 men of the congregation with the work starting in October 1949 and mostly done on Saturdays. Pastor Lohe laid the foundation stone on 2 April 1950. The church had seating for 150 people with a further 50 people in the separate choir loft. The church was designed by farmer Reg Waldman who also supervised the construction; he was also the church's organist. The building was not complete at the time of its dedication as the tower has only reached 27 feet (8.2 m) but the plans were for it to reach 50 feet (15 m) including a belfry.[24] The building was completed in 1976 with the erection of the spire.[25]

Brisbane Technology Park opened in 1986.[26] The park is located on a 33.5-hectare (83-acre) site that is only 12 minutes from the Brisbane CBD.[27] The Queensland Clunies Ross Centre for Science and Industry opened at the Technology Park in 1997.[citation needed]

In October 2014 a petition was made by 380 residents to excise the north-eastern part of Eight Miles Plains bounded by the Pacific Motorway and Bulimba Creek to create a new suburb to be called , the name given to the area by its developers in the 1990s. However, other residents are opposed to the change.[28][29][30]

Eight Mile Plains has a number of heritage-listed sites, including: 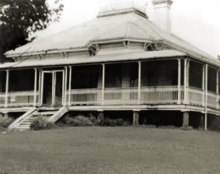 Hughesville is the heritage-listed residence located on the corner of Logan and Padstow Road. The timber single-storied home was erected in 1892–93 by Alfred (Fred) Hughes (a local horse dealer) on land owned by Richard Hughes and reputedly given to this son, Richard, as a wedding gift when he married Elizabeth Magee in 1891. Hughesville survives as illustration of a past way of life, and of a particular residential type - the quintessential Queensland house of the late colonial period. It is significant for its intactness, cohesive character, aesthetic appeal and landmark position. The house has a strong community association, being for many years a principal landmark along the old Pacific Highway to the Gold Coast, demarcating the outskirts of Brisbane. In the late 1990s, it was used in one of the beer advertisements in Queensland. The land has now been subdivided and a few townhouses have been built behind the house. The house itself has been converted into a business establishment. Hughesville was listed on the Queensland Heritage Register in 1992.[31]

According to the 2016 census, Eight Mile Plains includes the largest Korean Australian community of any suburb in Queensland,[37] numbering 1,150 individuals and making up 6.1% of the suburb's population.[38]