Eagle Farm is an eastern industrial suburb of the City of Brisbane, Queensland, Australia.[3] In the 2016 census, Eagle Farm had a population of 0 people.[1]

Kingsford Smith Drive passes through the suburb from west (Hamilton) to east (Pinkenba). The Gateway Motorway passes through the suburb from the south (Murarrie) crossing the Brisbane River via the Sir Leo Hielscher Bridges and then exits to the north (Brisbane Airport). The Southern Cross Way splits from the Gateway Motorway and also heads north-west, becoming the north-western boundary of Eagle Farm with Hamilton.[6]

The Doomben/Pinkenba railway line passes through the suburbs from west (Ascot/Hamilton) to east (Pinkenba) to the north of Kingsford Smith Drive. There are no railway stations within the suburb any more.[6]

The Royal Queensland Golf Club is located at 431 Curtin West Avenue and extends south to the river.[7] Apart from the golf course, the suburb is industrial.[6]

Despite the name, the Eagle Farm Racecourse, home of the Queensland Turf Club (QTC) and the main racecourse for thoroughbred gallopers in Brisbane, is located in neighbouring Ascot.[6]

Eagle Farm first appeared as a name in 1839, identifying a cultivation area in the Moreton Bay penal settlement. In 1829, Captain Patrick Logan chose this well-watered, fertile site between the Brisbane River and Serpentine Creek to farm mostly maize, pigs and cattle. The origin of the name apparently arose from eagles being observed around the farm. By 1834, women prisoners were working as field labour at Eagle Farm. By 1836, forty female prisoners were housed there, washing and mending clothes, growing vegetables. The site remained a prison for twice convicted female felons until transportation ended in 1839. Conditions for the females at the prison were documented by the Quaker missionary James Backhouse in 1836.[4]

In the 1850s, Aborigines set up camps in the Breakfast Creek Eagle Farm area, including groups of the Bribie Island, Ningy-Ningy (Toorbul Point to Redcliffe) and Wide Bay Aborigines who were losing their traditional territory further north.[8]

In October 1895, the Queensland Government approved the extension of the Racecourse railway which terminated at Racecourse railway station (now Ascot railway station) through Eagle Farm to Pinkenba to provide access to the Pinkenba Wharf on the Brisbane River. This created a number of new railway stations: Doomben, Whinstanes, Baraini (later renamed Airport to service Eagle Farm Airport, then later renamed Eagle Farm), Bunour, Meeandah and Pinkenba. The line opened to Meeandah on 31 March 1897, but the section to Pinkenba was below the high tide level and had to be reclaimed using sand dredged to construct a railway wharf on the river. The line opened to Pinkenba on 1 September 1897. In 1976, a new Whinstanes-Doomben railway station was created between the original two stations to replace them, and was renamed simply Doomben railway station in the 1990s. From 27 January 1998, the line terminated at this station and the following stations are now abandoned.[10]

On 24 April 1920, auctioneer Thorpe and Sharp offered 87 "park like" suburban allotments in the Whinstanes Junction Estate to the north-east of the Whinstanes railway station (no longer extant). The estate was bounded by Lamington Avenue to the south and the Doomben Racecourse to the north with allotments facing two streets Birdwood Street and Monash Streets. As at 2019, this area is an industrial estate with Western Avenue passing through it with no sign of Birdwood and Monash Streets.[11][12]

The Eagle Farm Airport served as Brisbane's main airport until the opening of the present Brisbane Airport in 1988.

Eagle Farm has a number of heritage-listed sites, including: 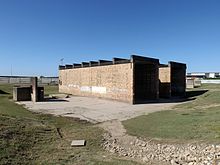 The Allison Engine testing stands site is part of Brisbane's TradeCoast Central at the old Brisbane airport site in the suburb of Eagle Farm, where new and rebuilt World War II Allison V-12 in-line liquid cooled aero engines were tested in the open air prior to fitting into reassembled WW2 aircraft, notably the P38-Lightning, Curtis Kittyhawk and Bell Airacobra. The masonry sections of the remains, being buildings and dividers between the engine testing bays, are largely intact. The engines were refurbished in the General Motors Holden (GMH) Breakfast Creek facility. Many of the workers in the GMH facility were women.[17][18]