Dutton Park is an inner southern suburb of the City of Brisbane, Queensland, Australia.[3] In the 2016 census, Dutton Park had a population of 2,024 people.[1]

Dutton Park is located about 4.3 kilometres (2.7 mi) south of the Brisbane CBD. It is bounded to the north-east by the Beenleigh railway line and the median of Brisbane River to the south-west.[4] Dutton Park lies on a ridge to the east of the Brisbane River, opposite from St Lucia. The site slopes down from Gladstone Road with an average gradient of 0.026.

The Eleanor Schonnell Bridge is a bridge across the Brisbane River connecting Dutton Park to the University of Queensland's St Lucia campus.[5] It carries a busway, cyclists and pedestrians but not private automobiles.[6]

Along the Brisbane River in the suburb, there is a large park (also called Dutton Park) alongside the South Brisbane Cemetery.[5]

Along Annerley Road is the former Boggo Road Gaol, part of which remains as a heritage site. The remainder of the gaol site was redeveloped as the Ecosciences Precinct, part of the Boggo Road Urban Village development. The precinct is a research facility for the Queensland Government, CSIRO and the University of Queensland through the Queensland Alliance for Agriculture and Food Innovation (QAAFI).[7]

Apart from these major facilities, the suburb is predominantly residential, with some light industrial and commercial areas.[5] 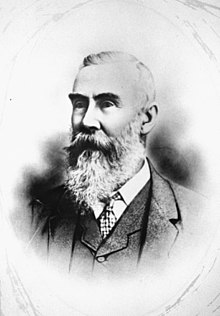 Development in the suburb was slow because of difficult terrain, and the fact that a large part of the area was surveyed for government reserves by H.C. Rawnsley in 1863.[8]

The South Brisbane cemetery was reserved in 1866 and is Brisbane's oldest surviving municipal cemetery.[9]

The name Dutton comes from Charles Boydell Dutton, the Queensland Minister for Lands from 1883 to 1887, who created the recreation reserve in 1884. This became known as 'Dutton's Park', a name which was later applied to surrounding estates, a school (originally known as the "Jail School")[10] and a railway station before becoming the name of the suburb.[11]

On 2 July 1883 the Boggo Road Gaol opened, firstly serving as a holding place for prisoners who were to be transported to St Helena Island but by 1989 housed over 300 prisoners. In 1903 a separate structure was opened adjacent to the main prison to house the female prisoners. After a Queensland Government inquiry into the living conditions of the inmates the female section of the prison was closed in 1989 with the male section closing in 1992 and later being demolished in 1996.

In 1884, the South Coast railway line was built, which included a station at Dutton Park. 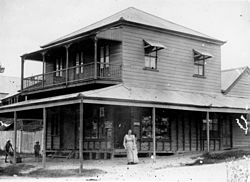 Between 1901 and 1969 the suburb was served by electric trams. Tram services operated along Gladstone Road[13] and Annerley Road, with a connecting line to the Ipswich Road tram depot along Cornwall Street. J.S. Badger, owner of the Brisbane Tramway Company, developed the Dutton Park recreation reserve in order to increase patronage on the trams. For several years from 1908, open-air movie and variety shows known as 'Continentals' were held at the park, and proved enormously popular, drawing up to 5,000 people a night.[14]

On 17 December 2006, the Eleanor Schonell Bridge was opened, linking the St Lucia campus of the University of Queensland with southern Brisbane. 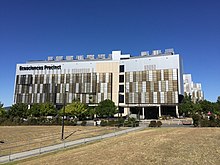 The Ecosciences Precinct in the Boggo Road Urban Village development opened in 2011.[15]

Dutton Park has a number of heritage-listed sites, including:

The suburb is dominated by Dutton Park, which includes a large recreation area and public cemetery (colloquially known as Dutton Park Cemetery but officially known as South Brisbane Cemetery). T. J. Doyle Memorial Drive passes through the park and along past the river; it was named after Thomas Joseph Doyle, alderman for South Brisbane ward of the City of Brisbane from 1954 to 1964.[20]

The former Boggo Road Gaol was located in the suburb and the remaining structure is now a historical museum.

The Eleanor Schonell Bridge linking the St Lucia campus of the University of Queensland with southern Brisbane. The area is a popular place for picnics and tranquil riverside walks along the banks of the Brisbane River.

In the 2016 census, Dutton Park had a population of 2,024 people. The median age of the Dutton Park population was 32 years, six years below the Australian median. Children aged under 15 years made up 14.4% of the population and people aged 65 years and over made up 12.1% of the population. 58.4% of people were born in Australia. 62.2% of people spoke only English at home. Other languages spoken at home included Greek at 5.1%. The most common responses for religion were No Religion 40.4% and Catholic 17.9%.[1]

By Bus, Brisbane Transport bus routes 192, 196 and 198 serve the suburb along Gladstone Road. Annerley Road to the City (via the Busway) is served by routes 105, 107, 108, 109, 116 and 202. With the opening of Dutton Park Place busway station on the Eleanor Schonell Bridge and the Boggo Road Busway, which opened on 3 August 2009, the suburb has become a major hub for the Brisbane City Busway as well as the terminating point for the Boggo Road Busway.

By Train, Dutton Park is served by the Dutton Park Railway Station which lies on the Beenleigh/Ferny Grove Line.