The suburb takes its name from the Corinda railway station, which in turn was likely named after a local cattle station owned by Sir Arthur Palmer, which he named after his Corinda pastoral station near Aramac.[3]

Corinda was first settled in the 1860s as a small farming community. Among the original settlers was the Francis family who in 1862 purchased 21 acres, which extended from the Brisbane River to Francis Lookout, a local heritage listed[4] landmark on Dewar Terrace. Francis Lookout survives to this day, and includes a small burial ground opened in 1862.[5] Its ten graves include those of some of the pioneer settlers. The oldest of the graves is of Clement Francis who died in 1863. The lychgate, erected by Angela Francis, dates to 1902. Most of the original older-style Queenslander homes date back to the colonial period and were built high on the hills around the lookout.

The first rail line opened in 1874. A small commercial district on Oxley Road gradually grew around it. The Corinda School of Arts (now municipal library) is one of the earliest surviving buildings on this strip and is a small timber structure built in 1895. The commercial district rapidly developed after the 1920s. Many large bungalow styled homes were built on the floodplain toward Oxley Creek during this time.

In October 1883, 140 subdivided allotments of 'Sherwood Junction Estate' were auctioned by J. Cameron. A map advertising the auction shows the Estate was at the junction of the South Brisbane Railway Line.[6][7]

In 1915 seeing a need for more Catholic schools, Roman Catholic Archbishop of Brisbane, James Duhig, invited a number of orders of teaching Sisters to come to Brisbane. One of those orders was the Daughters of Our Lady of the Sacred Heart who came to Brisbane and established St Joseph's Catholic Primary School, which opened on 28 January 1917 with 50 students. The school was operated by the Sisters until 1993, when a lay principal was appointed.[9][10]

In July 1920, 32 subdivided allotments of 'Corinda Park Estate' were auctioned by Cameron Bros. A map advertising the auction states the Estate was 10 minutes walk from both Corinda and Oxley Railway Stations[11][12]

Montrose Home School for Crippled Children opened in January 1934. In March 1934 it was renamed Montrose Special School. It closed on 2 June 2006.[10]

The Corinda RSL was established in 1964 and now trades as the Sherwood Services Club.[13] With the opening of Coles Supermarkets, the commercial centre has continued to develop and extend westward.

The Corinda Library became a branch of the Brisbane City Council library in 1966 and had a major refurbishment in 2016.[14]

The suburb experienced a landslip during the 1974 Brisbane flood which affected more than 20 houses.

Weemalla was listed on the Queensland Heritage Register in 2013 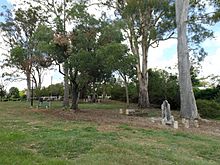 Corinda has a number of heritage-listed sites, including:

Corinda has two main parks both sharing the same name but separated at either end of the suburb. One is a forest reserve along the Brisbane River which includes Carrington Rocks and Carrington Boat Club. The other is on the floodplain of Oxley Creek near the bowls club and state school. The historic Francis Lookout reserve has another small park used for the traditional local Carols by Candlelight celebrations run by various local church and school groups. The Sherwood Arboretum borders the suburb but is located in Sherwood. 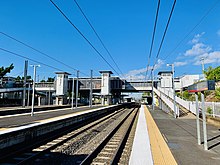 The Corinda railway station provides residents with access to the Brisbane CBD, servicing many suburbs and providing access to many popular entertainment and educational venues along the way, including the Indooroopilly Shopping Centre and the University of Queensland. As a result of changes to transport planning in July 2011, there is also a less frequent bus service (Bus 104) to Tennyson railway station. 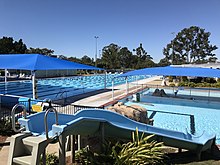