Coorparoo was chosen as the name of the suburb at a public meeting on 22 March 1875, before which it was known as Four Mile Camp.[5][6] The name Coorparoo is likely derived from an Aboriginal name for Norman Creek, probably recorded by early surveyors as Koolpuroom.[7] The word is thought to refer to either a place associated with mosquitoes, or a sound made by the 'gentle dove'.[5] The latter explanation appears doubtful though, as 'gentle dove' may mean the spotted dove, which was introduced to the area in 1912, long after the name Coorparoo was adopted.[5]

The Coorparoo Clan lived south of the Brisbane River and generally camped along creeks. Their name comes from Kulpurum, which was the word for Norman Creek or a tributary of it. They continued to occupy watercourse campsites after white settlement, but other clans from the region began to move into South Brisbane.

In 1846, there were reports[by whom?] of Aborigines raiding produce along Norman Creek. In 1853, there was a fight between Ningy Ningy, Bribie Island, Amity Point, and Logan peoples at Norman Creek. A visitor in 1855 reported many camps and fishing spots between Stones Corner and the mouth of Norman Creek. In 1959 an eighty-year-old woman told of frequent corroborees on the banks of the creek in Norman Park. Corroborees were also held at a little creek that crossed Norfolk Street.[8]

On 17 June 1856, ten farms were sold from the Parish of Bulimba near Stones Corner. Investors bought all but two of them. The next year James Warner surveyed land on the other side of the road for a second land auction.

Samuel Stevens donated two acres of his property near the junction of Cavendish and Old Cleveland Roads for use of a school. He declined the offer of naming the area "Steven's Town". 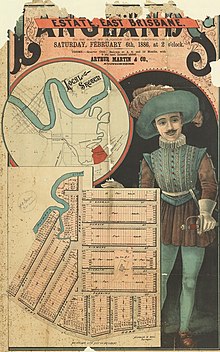 In 1876, the Coorparoo State School was opened and Frederick Robinson began offering public transport in a wagonette from Coorparoo Junction to Victoria Bridge. The 1880s land boom was a spur to profit from land. John Black was the first to subdivide land in the area in 1882 and later a variety of subdivisions were offered to the public. The construction of the bridge at Stanley Street (1886) and the development of the Stanley Bridge Estate made the area more attractive to purchasers. In 1887, the tramway was extended to Buranda, putting the western end of Coorparoo close to tram travel. 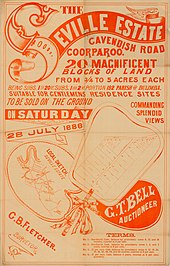 Coorparoo had been part of the Bulimba Divisional Board since 1879. However, in 1888, as a result of dissatisfaction with this situation, a petition was taken resulting in the creation of Shire of Coorparoo. A bridge was built at Burnetts Swamp (Stones Corner) and important road improvements took place. Development was taking off. In 1889 there were 2,500 people in the shire.

In February 1886 the"Langlands Estate, East Brisbane" was advertised to be auctioned by Arthur Martin & Co. The advertisement describes 568 allotments commencing a few yards beyond the junction of the Cleveland and Logan Roads, with extensive frontage to the Cleveland Road.[9] A map advertising the auction shows the Nicklin residence on the estate.[10]

On 22 December 1888 "St Leonard's Estate" was advertised for auction by R. J. Cottell. A map advertising the auction shows the estate as adjoining the "Langlands Estate" and close to the Coorparoo railway station.[11] A newspaper advertisement of the day notes that "St Leonard's Estate" can be reached "in a very few weeks by the train".[12]

In May 1889, on what is now known as Carina, 275 subdivided allotments of "Stanley Street Extended Estate" were advertised to be auctioned by James R. Dickson & Company. A map advertising the auction mentions 'free waggonettes from the Mart'.[13][14]

The floods of and 1893 hit the low-lying areas of Coorparoo. The flooding combined with the 1890s depression slowed development in the area. In 1900 there were actually fewer houses than there had been ten years earlier. The settlement was dense from Stones Corner to Kirkland Avenue (originally named Wecker Street but it was changed in 1914 in the wake of anti-German sentiment), but further out it was mainly bush with a few isolated farms and houses. The only major industry was the brickworks of Abraham James at St Leonards Street, which employed eighty men in the 1880s.

After World War I, land prices increased as property sales boomed. Coorparoo did not really begin to expand again until the tram service was extended to Stones Corner in 1902 and Coorparoo Junction in 1915. The number of houses increased from 613 in 1911 to 1,467 ten years later.

St Anne's Anglican Church opened circa 1958 in the Upper Cavendish Road area. It closed circa 1980s.[15]

Aboriginal and/or Torres Strait Islander people made up 0.9% of the population.

In 2015, the old Myer Department store building on the corner of Old Cleveland Road and Cavendish Road was demolished. In its place are 3 residential towers with commercial development on the lower floors. The development, known as Coorparoo Square opened in 2017 and features a 10 screen Dendy cinema, Aldi Supermarket and speciality retailers and coffee shops. Under the development, will be a void for the future Eastern Busway station.[20]

Coorparoo is home of the Eastern Suburbs District Rugby League Football Club who play their home games at Langlands Park. Langlands Park regularly hosts training sessions for the Queensland and Australian Rugby League teams when they are playing in Brisbane.

The Brisbane Lions train during the week at Giffin Park, also in Coorparoo. 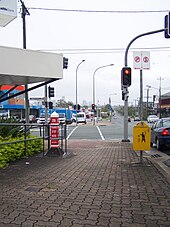 Brisbane City Council provides 30 parks in Coorparoo. They range in size from large to small and have a range of different facilities.[23]

Coorparoo has a range of distinctive homes, buildings, and sites of interest, including:

Coorparoo has a number of heritage-listed sites, including: