Chuwar is a town and suburb of Ipswich in the City of Ipswich and a locality of the City of Brisbane in South East Queensland, Australia.[3][4][5] In the 2016 census, Chuwar had a population of 2,244 people.[1]

Chuwar is 6 kilometres (4 mi) north of the Ipswich central business district, 32 kilometres (20 mi) west of Brisbane by road. The suburb is known for its leafy streets and solid brick homes which line Allawah Road, Lansdowne Way and Brodzig Road.

The town takes its name from the parish, which in turn was named in October 1848 by surveyor James Warner. The origin of the name was not recorded by Warner but it has been suggested that it was the Aboriginal name for the district or a corruption of it.[3] 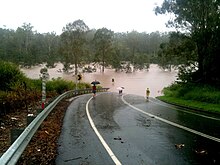 Colleges Crossing underwater at Chuwar during the 2011 floods

Chuwar has a number of amenities including a service station, a produce store, two churches, a motorcycle track and a veterinary surgery. There is a shopping centre with a major supermarket in the neighbouring suburb of Karalee. The suburb's two churches are Chuwar Baptist Church, which runs a yearly community day called the Street Party, and Rivers of Life Christian Church, which operates the Tivoli Drive In Theatre & Community Events Centre and market stalls. Chuwar includes the residential Karana Gardens Estate.

Chuwar includes Colleges Crossing, a popular park and river crossing on the Brisbane River with walking trails, lookouts, and clean water for swimming and fishing.

Chuwar is accessible by road with Mount Crosby Road directing traffic directly to Ipswich and Karana Downs, and the Warrego Highway routing traffic to Brisbane and Toowoomba.

The Kenmore Bypass, also known as the "Western Freeway Extension" and the "Moggill Pocket Sub-Arterial", is a proposed motorway to run from the Western Freeway at Fig Tree Pocket to the Warrego Highway at Chuwar, connecting the suburbs of Karalee, Anstead, Pullenvale and Kenmore, to divert traffic from the Ipswich Motorway and Moggill Road.